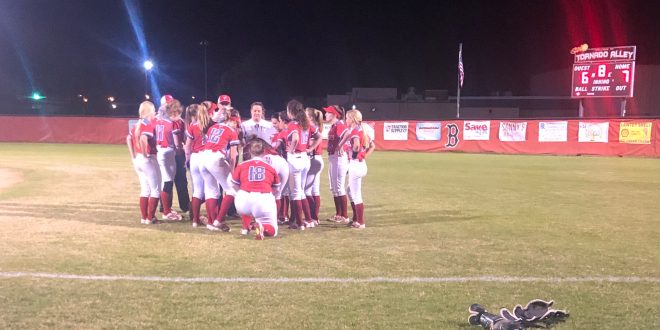 Talia Brown sealed the deal for the Tornadoes Monday night with a game-winning home run in the bottom of the eighth inning to win the game for Bradford.

This 7-6 victory comes after a back and forth game that found Bradford in a hole, down 2-0 up until the bottom of the third inning. Hannah McFarland had a nice hit to center that allowed Talia Brown to run home, making the score 2-1.

A huge 4th inning for Bradford, that was once down 2-0, now up 6-2 going into the top of the 5th! @ESPNGainesville

The Tornadoes had an explosive fourth inning, scoring five runs to run up the score 6-2. First, Delany Crosby had a hit to left field with bases loaded that moved Allie Funderburk home, tying the ball game at 2 apiece.

A couple errors by Bardford’s outfield allows Union County to tie the game at 6 going into the bottom of the 6th with Bradford now up to bat. @ESPNGainesville

After letting the score get to 6-2, Union County made a huge comeback that included a few errors in the Bradford outfield. First, Randa Godwin had a hit to left field that sent Kamaya Cohen home, making the score 6-3.

The top of the sixth is where the Tigers tied the game when Kensley Hamilton had a hit to get to first, but a missed catch from Brown to first base allowed a Tiger to score. Directly after, the Tigers were able to score again, and then another error caused the Tigers to tie the game, 6-6.

Bradford has a chance to win this game going into the bottom of the 7th, tied 6-6. @ESPNGainesville

The seventh inning left both teams nervous but also left both teams scoreless. Three quick outs for the Tigers, including a beautiful catch by Brown to get the third out.

The Tornadoes were able to get a girl on the first and third base before receiving three outs and forcing overtime.

During overtime, the Tigers weren’t able to face the pressure as three quick outs put them back in the outfield. Bradford was set up perfectly to win the game. Talia Brown stepped up to bat and hit a foul ball. Then, knocked the ball out of the park to win the game for the Tornadoes.

The Tornadoes now move to 7-3 on the season and will face Newberry Highschool at home on Thursday.