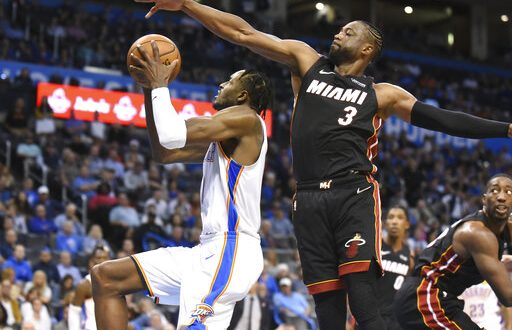 The Heat (34-36) have been ignited. With another crucial win, they have kept its playoffs hopes alive and well.

Even the absence of point guard Justise Winslow hasn’t slowed the effort down. Winslow, who sat out his second consecutive game with a right thigh bruise, has been a contingency in the Heat’s success this season.

Meanwhile, the Thunder couldn’t survive without a suspended Russell Westbrook in its push to re-enter the top four in the Western Conference.

Taking down the roaring Thunder

The Thunder took it to the Heat early with a 13-0 run led by Paul George. The hungry road team was left to mitigate the stinging deficit. But a lackluster effort from both ends of the floor was quickly erased.

Dragic’s effort would inspire the rest of the Heat offensively in the second quarter.

The Heat stretched the deficit further before the last eight minutes, where Dennis Schroder and Paul George attacked. The defense kept the two somewhat at bay, but the Thunder lingered closely, inching in on the Heat before halftime.

The second half resulted in the Heat keeping the Thunder further away from victory, despite some slight effort in the final six minutes of the game. But the Heat would ultimately silence the Thunder and pull away.

The Heat’s bench carried the team to victory, with Dragic putting up 26 points, 11 assists and five rebounds for a double-double performance.

The Thunder’s starters put up a respectable effort, with Paul George leading the night with 31 points, nine rebounds, and five assists. Jerami Grant followed behind with a double-double of his own in 27 points, 10 points, and one assist.

The fight for the eighth and final seed in the Eastern Conference has proven to be a contentious battle. The Orlando Magic sit a game behind the Heat in the chase for its first playoff appearance since 2011. If the Heat win out in the final stretch of the postseason is likely in its future.

The Miami Heat continue its road trip on Wednesday in San Antonio to take on the Spurs, with tipoff set for 8:30 p.m.