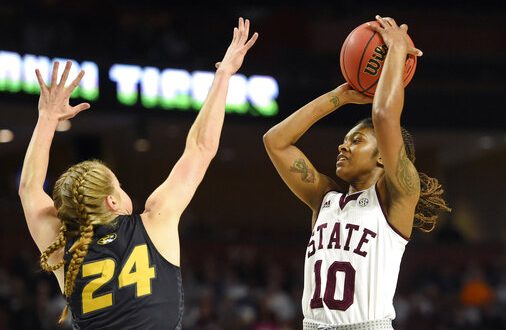 Seven SEC teams have received their bid for the 2019 NCAA Women’s Basketball Tournament. This will be the 12th time in history that seven teams in the SEC have received bids to go to the tournament.

The SEC now leads the nation with 241 total tournament bids.

Mississippi State has reclaimed their No. 1 spot for the second consecutive year. They will host the first and second round games. After hosting these games at Humphrey Coliseum, they will head out west to Portland.

Their first game will be against No. 16 Southern University, winner of the Southwestern Atlantic Conference Tournament. This match-up will take place on Friday at 9:30 PM.

The new normal in Starkville…

The Bulldogs are entering the tournament 30-2 on the season, with their only losses coming from Oregon and Missouri. If Mississippi State wins the first round game, they will move on to play either No. 8 South Dakota or No. 9 Clemson on Sunday.

Should both teams make it to the regional finals, a potential rematch between the Bulldogs and Oregon may be in store.

South Carolina earned a number four spot and will host the first and second round games in Charlotte due to their home court being unavailable.

USC was granted a waiver to play there in February. They will play the No. 13 seed Belmont this Friday at 1:45. Should the Gamecocks win, they will face the winner of No. 5 Florida State-No. 12 Bucknell on Sunday.

Should both teams win the first two rounds, South Carolina may have to face off against the No. 1 seed Baylor.

After an upset loss to Arkansas in the first round of the SEC Tournament, the Gamecocks are glad to have a home-court advantage, or as close as they can get to one.

South Carolina’s watch party at Williams-Brice Stadium was impacted by ESPN’s accidental reveal of the bracket. The broadcast took place before the team could even arrive at the stadium. The team then had to stage a reveal reaction video with fans.

The SEC earned another four seed in the tournament with Texas A&M. The Aggie’s first opponent will be the 13 seed Wright State. This game will take place at 4:30 this Friday.

With a win Friday, Texas A&M would then go on to host the winner of 12 seed Rice and five seed Marquette on Sunday. Should the Aggies win out and make it to the Sweet 16, they would have to face off against the No. 1 seed Notre Dame.

The 4-seed in the Chicago Region. @AggieWBB is dancing! #ncaaW pic.twitter.com/RN8VHYKOCm

The Aggies finished the season 24-7 overall. The premature bracket reveal also plagued the Texas A&M team when they found out their seed hours ahead of schedule. However, much to the desire of the Texas A&M fans, the Aggies secured a much desired four seed in the Chicago region.

The Wildcats have earned their ninth appearance in the tournament in the last ten seasons. They’ll be the sixth seed in the Greensboro Regional. Kentucky will face off against No. 11 Princeton this Saturday at 11 a.m., in Raleigh, N.C.

Should Kentucky win on Saturday, they will move on to face the winner of No. 3 NC State and No. 14 Maine.

The Wildcats ended their season with a record of 24-7 and rounded out at fourth in the SEC. Before last season, the Wildcats had become a permanent member in the tournament.

Before dropping the ball last season and finishing just 15-17 on the season, Kentucky had made it to the tournament eight straight times, including four trips to regional championships.

Even though Missouri earned a lower than expected seed, at No. 7, their location all but made up for the low seeding. Missouri’s location in the Greensboro region is Iowa City, which is less than four hours away from Columbia.

Missouri is set to take on No. 10 Drake, this Friday at 4:30. Should they win this match-up, Missouri would have to face off against the winner of No. 2 Iowa and No. 15 Mercer.

The Tigers finished the season 23-10, and this tournament bid makes it the fourth straight tournament appearance for Missouri. This is the first time that the Tigers have accomplished this since 1983-1986.

The Tigers will face No. 7 BYU in the Stanford regional. Should Auburn win this match-up, they will have to face the winner of No. 2 Stanford and No. 15 UC Davis.

Makeshift selection show but the reactions are still just as good.

Auburn finished the season 22-9. This is just the third time that Auburn has made the tournament during head coach Terri Williams-Flournoy’s seven-year tenure.

Tennessee was on the bubble for most of the season. However, they continue to make it into the tournament. This is Tennessee’s 38th appearance in the NCAA Division I Women’s Basketball Championships since its inception in 1982. This makes Tennessee the only team to accomplish this.

The 11-seed in the Albany Region. pic.twitter.com/K7pbU2gVaH

No. 11 Tennessee will face off against No. 5 UCLA on Saturday at 1:30. Should the Volunteers upset the Bruins, they will have to play the winner of No. 3 Maryland and No. 14 Radford. Tennessee finished the regular season 19-12. 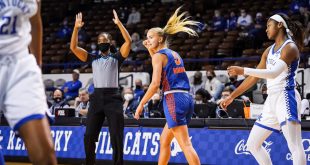