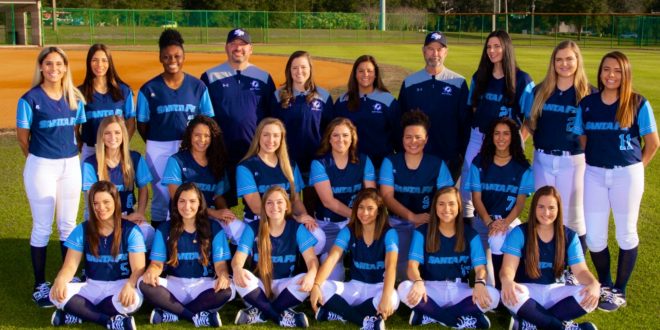 The Santa Fe Saints softball team hired a familiar face to gator nation this past year. Former Gator’s softball player Lindsay Fico took over as head coach for the Saints this past September.

After graduating college, Fico was coaching travel softball until she took the job with Santa Fe College.

Through a transition, Fico said that she stills focuses on the same things as before, “We just try to focus on the basic fundamentals like we did when I was coaching the travel ball team,” Fico said.

Fico played under current Florida Gator’s head coach Tim Walton and said that she learned a lot from him that she now implements into her team.

“From my playing days at UF and playing for Coach Walton, he instilled values on and off the field, but more than anything he taught us how to work,” Fico said.

Fico also mentions that Walton taught the team how to work efficiently, effectively and do more from a quality standpoint.

“Our belief here at practice is that you don’t necessarily have to practice for 3.5 hours to get anything done. You can come here, get a good 2-hour practice, and get in just as many quality reps and feel really good at the end of the day to be prepared to play a game the next day,” Fico said.

The Saints are currently 15-17 on the season and move into conference games for the rest of the season.

“I’m hoping that we’ve had our growing pains that we needed to have at the beginning of the season, so now we can kind of hit our peak when we need to hit it,” Fico said.

Fico is sticking to the basics for the rest of the season. “We are just hoping to focus on the basics. We pitch strikes, hit strikes when it’s our turn to hit strikes, make the plays we can make, limit the errors limit the walks.”

“I’m thinking we are going to hit our peak when we need to hit it and finish off conference play strongly.”