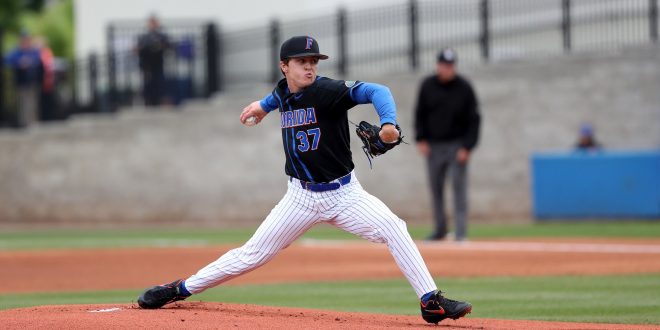 The 14th ranked Gator baseball team scored early and then hung on to beat Jacksonville, 13-8 on Tuesday night as they finished off a 14 game home-stand.

#Gators finish it off!

Crisp gets his first W, Alintoff gets a save and McConnell with a career-high 4 RBI pic.twitter.com/wW8ffiIaq6

All three batters reached base, with Nelly driving home Young. Runners on the corners, no outs.

Next, Kendrick Calilao singled to bring in another run for Florida and Maldonado scored on an error for a 3-0 Gator lead through one inning.

After that, in the third inning the Gators added three more as Calilao drove home a run with a sacrifice fly, that was followed by Cory Acton singling home Maldonado and Wil Dalton scoring on a wild pitch to give Florida the lead, 6-0.

Sac fly from Calilao, RBI single from Acton and wild pitch brought in a run. pic.twitter.com/lSFD7D2YmT

Florida would later extend the lead to 11-2 through five innings but then JU’s Duncan Hunter hit a three-run homer in the sixth and first baseman John Cassala cut the lead to three with a three-run shot in the seventh to make it 11-8.

We are stretching at McKethan Stadium and the Dolphins have some life! John Cassala brings Jacksonville back within three, and @DarienS49732140 comes out of the pen to take over pitching duties.#JUPhinsUp #DareToBeBold

Likewise, Florida’s Brady McConnell gave the Gators a few insurance runs with a two-run home run in the bottom of the half of the inning to make it 13-8.

He went 3-for-3 with three runs scored and a career-high four RBI’s that included his two-run homer.

His third homer of the year makes it 13-8 through seven innings. #Gators

Florida freshman pitcher Nolan Crisp set the tone early in his first ever collegiate start. After not seeing any time on the mound last weekend, Crisp retired the first seven batters he faced and only allowed one base runner through four innings.

Crisp would later get limited on a pitch count that brought in Ben Specht to take over on the mound. Normally working in a bullpen role, Crisp is tied for the national lead with seven saves on the year.

To sum up, Gator head coach Kevin O’Sullivan spoke on his performance on the mound.

Florida travels to Nashville for a three-game series at number six Vanderbilt starting on Thursday. All three games will be broadcast on the Gator Sports Network and SEC Network+.