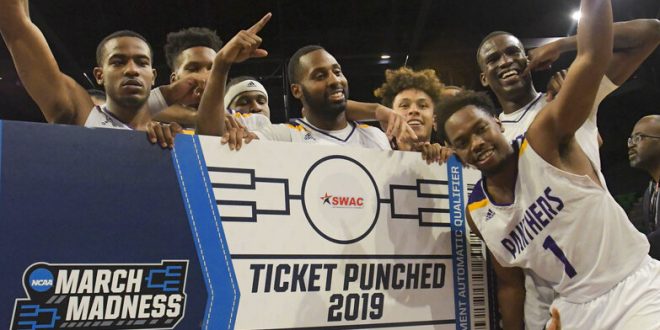 With 68 teams currently in the field, the Fairleigh Dickinson Knights and Prairie View A&M Panthers play in the First Four in hopes of continuing their playoff journey.

Both teams have been out of the March Madness spotlight for a few years and are coming in with a chip on their shoulder.

After defeating Texas Southern 92-86 on Saturday, Prairie View clinched it’s first to return to the playoffs since 1998. Likewise, after beating St. Francis 85-76, Fairleigh Dickinson returns to the NCAA Tourney for the first time since 2016.

Prairie View A&M opened its season 1-11, but finished 21-1 and just won the SWAC tourney. First time the Panthers are dancing since 1998. Awesome story.

Forward Mike Holloway commended his team’s offense and their ability to convert buckets by utilizing an inside-out offense on the court. This inside-out style offense is what has helped Fairleigh Dickinson become the leading 3-point shooting team in its conference, the Northeast Conference.

“We play inside out. we feed the ball inside and then when guys starts doubling-down on myself and all the other bigs we get back out to our shooters and Darnell. And as you see, that’s been working for us very well. Darnell’s shooting at a high percentage.. We play a lot of inside out basketball which helps us out.”

Senior Guard Darnell Edge has been a key player in the Knights offense success.

Knights Head coach Greg Herenda says that Fairleigh Dickinson the team are incredibly fortunate to play a team of Prairie View’s caliber. He says the Knights have never won an NCAA basketball game.

“To find out that we are going to play a championship team in Prairie View, in Dayton, and then witht he potential to go on and play the Gonzaga Bulldogs- we’re incredibly fortunate.”

Although the Panthers just punched their ticket to the NCAA Tournament for the first time since 1998, Prairie View is not unfamiliar with what it feels like to win.

The Panthers are riding a strong 11-game winning streak.

On top of that, they were just dubbed the Southwestern Atlantic Conference Champions after a convincing 92-86 win.

Coming off fo the win, Head Coach Byron Smith says the team has a quick turnaround before playing the Knights.

When it comes to offense, Coach Smith believes the two are very similar.

“They’ll be a strong opponent. They’ve balanced scoring. Probably 3 or 4-5 guys that average around 13-14 points a game kind of like right where we are. We think we’re pretty simliar in terms of the types of offensive output that they have.”

Moving forward, the winner of tonight’s game will play the Gonzaga Bulldogs next. Who ya got?