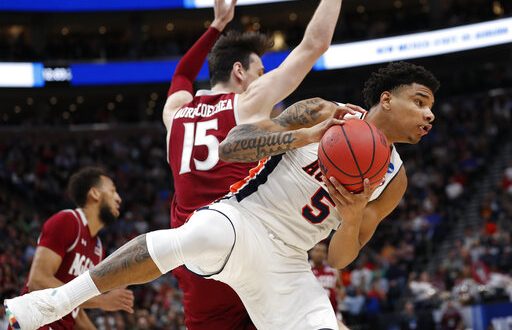 After winning the SEC Tournament many picked 5 seeded Auburn to go far in the NCAA Tournament. However, the Tigers scared quit a few fans when they narrowly defeated 12 seeded New Mexico St. 78-77.

New Mexico St. went into the game with a 30-4 record and were on a 19 games winning streak until Auburn snapped it by one point.

Fun fact about Auburn, is that they have a perfect record when it comes to the round of 64. They are 9-0 which is the best of any team since 1985 when the tournament expanded.

New Mexico State beat Auburn in both turnovers and rebounds. Though, it was the Tigers strong 3 point game that help secure the win. The Tigers were hitting 38.7% of their shoots from behind the arc. While, the Aggies hit 28% of their threes.

Auburn guard, Jared Harper, led the team with 17 points shooting 6/11. Harper said that things really started to mesh for him in the second half. That’s when he says he hit his first 3 pointer.

For the Aggies, forward Johnny McCants, led the team with 16 points going 6/7.

After the game, Auburn Head Coach Bruce Pearl and players Dedric Lawson and Jared Harper spoke with the media.

Coach Peal said that before the game he told the guys that this would would be the toughest game for them in the tournament, because of how good the Aggies looked during the regular season. He also mention that the Aggies played with “no fear.” Coach noted that while his team did make quite a few mistakes towards the end of the game (like turning the ball over), he says that the great plays they had throughout the game enabled them to stay in the game late.

The full press conference is below:

The Auburn Tigers will now take on 4 seeded Kansas Saturday night at 9:40pm on TBS. Kansas enters the game after crushing the Northeastern Huskies 87-53.