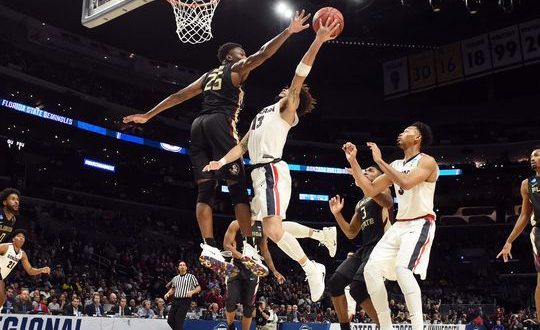 The second week of the NCAA Tournament gets underway this evening with four marquee matchups. Gonzaga faces off with Florida State and Purdue battles Tennessee, starting at 7:09 and 7:29, respectively. Texas Tech vs. Michigan and Oregon vs. Virginia will get started after the completion of the first games.

Possibly the most intriguing contest is between the Florida State Seminoles and the Gonzaga Bulldogs. The two teams are meeting in the Sweet Sixteen for the second time in as many years after the ‘Noles defeated the Zags 75-60 in 2018.

Leave it all on floor tonight. #MarchOn pic.twitter.com/haka35nSlz

Florida State has glided to its second Sweet Sixteen in two years after taking advantage of two double-digit seeded teams.

In the first round, the Seminoles survived a slight scare from Vermont, beating the Catamounts 76-69 behind Mfiondu Kabengele’s 21-point performance.

The second round game against the Murray State Racers was an easier victory for FSU as it dismantled the 12 seed 90-62. The ‘Noles were too much for the Racers on the boards, outrebounding them 45-33. Kabengele and Terance Mann led the team, scoring 22 and 18, respectively.

This challenge will be unlike either of the team’s first games as Gonzaga comes into the matchup as one of the four No. 1 seeds still alive at this point of the tournament.

The Zags have the size to compete with the ‘Noles and because of that, the expectation is that this game will go down to the wire.

FSU coach Leonard Hamilton spoke a bit about the matchup on Wednesday:

Last season’s matchup saw the Seminoles’ efficiency on the offensive end of the court. The team shot 47 percent compared to just 34 percent for the Zags. Defensively, if the Seminoles guard like they’re capable, they could end up playing on Saturday.

Kabengele saw the matchup being a possibility on Selection Sunday:

Gonzaga with revenge on the mind

In round one, Gonzaga took care of the Fairleigh Dickinson Knights 87-49, simply showcasing the talent gap against the 16 seed. The Bulldogs outrebounded the Knights by 17 and shot nearly 23 percent better from the field.

The Round of 32 matchup against the Baylor Bears saw the Bulldogs win 83-71 behind a 36-point performance from Brandon Clarke.

Few spoke to the media about the matchup with the ‘Noles on Wednesday as well:

The Bulldogs have now made the Sweet Sixteen an amazing five times in a row, this time around hoping for a different result against FSU: