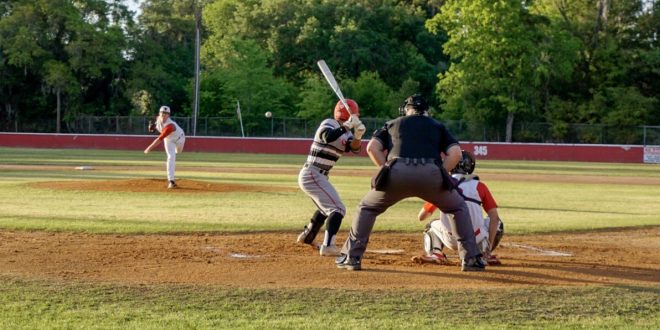 The Williston baseball team lost in high school baseball to the 8-3 on Thursday. After going on a five-game winning streak, capped off by an impressive home victory against Dunnellon, the Red Devils have gone into a bit of a slump, losing three of their last four contests.

“We’ve been in a bit of a funk the last couple of ball games. We’ve just got to regroup and come back and play like we know how to play,” he said.

One of the consistent themes of this game was pitching and defensive mistakes for the Red Devils. As a team with a .956 fielding percentage over the course of the season, Williston is not accustomed to making mistakes in the field. However, they committed two defensive errors against the Raiders, not counting several mental mistakes that didn’t count as statistical errors. A perfect example is the sixth inning when the Raiders were able to load the bases due to the Red Devil’s inability to field back-to-back bunt singles. Santa Fe went on to score three runs in that inning.

Difficulty on the Mound

The Red Devils lost to Santa Fe primarily because of pitching and defense, as highlighted by the absence of starting pitcher C.J. Strange due to an elbow injury. Parker Seay got the start, boasting a scorching 0.76 era with a 4-0 record and 38 strikeouts over five appearances. Seay lacked the control that makes him such a threat in this game, though, and the Raider hitters were able to tee off as soon as they figured him out. In an uncharacteristic start, Seay walked four and had five strikeouts, while allowing four earned runs over four innings.

Closer Gabe Foster, who had yet to give up a run over 13+ innings on the season, struggled as well. Foster also gave up four earned runs, and couldn’t hold the Raider bats.

Clean Play by the Raiders

While the Red Devils made an uncharacteristic amount of mistakes on defense that kept them out of the game, Santa Fe played an excellent game all around. Eight of the Raider’s starting nine made it on base, either by a walk or base hit, at some point in the game. Jacob Deason had three hits and an RBI and cleanup hitter Brennan Haire had three hits with two RBI.

Not only that but starting pitcher Ryan Brown turned an excellent performance, giving up only two earned runs over five innings, while recording four strikeouts. Brown earned his fifth win, bringing him to 5-1 on the season, and closer Dustin Beckelheimer got the save out of the bullpen.

Coming down off a win streak to go into a tough slump can be hard for a team, but coach Smith attributes the Red Devil’s tough stretch to injuries and a lack of concentration.

“We’re going to regroup and go back to the fundamentals that have gotten us to where we are. We’ve already clinched the top seed in the district so we’re looking to play to May. We’ve got four injuries we’re dealing with right now that we’re trying to get healthy, so if we can do that, we’ll be fine.”

Williston has, indeed, clinched 1A District 6 with two wins over Union County and a win against Hilliard already this season. With pitcher C.J. Strange returning soon from nerve problems in his elbow, and two players returning from the flu, Smith does believe his team can right the ship in time for the playoffs. A home game against a Crescent City team that the Red Devils defeated 8-0 earlier in the season should be a good start. Those teams will face off on April 2 at 6:00 p.m. and Santa Fe will continue its season after a week-long break, hosting Palatka on April 10 at 7:00 p.m.

Closing pitcher Dustin Beckelheimer takes care of business in the bottom of the 7th, and the Raiders earn their ninth victory of the season.

An uncharacteristic pitching and defensive effort by the Red Devils was the difference maker in this one.

I'm a third-year student at the University of Florida passionate about storytelling and sportswriting. My goal is to work in communications for a professional sports team after I graduate.
Previous NCAA Sweet Sixteen: Florida State vs Gonzaga Preview
Next Braves, Marlins and Rays All Come Up Short on Opening Day