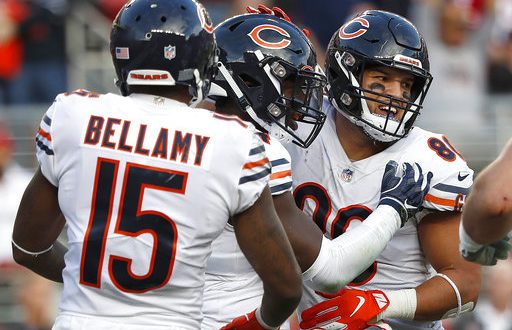 Chicago Bears running back Jordan Howard, center, celebrates with Josh Bellamy (15) and Trey Burton after scoring against the San Francisco 49ers during the second half of an NFL football game in Santa Clara, Calif., Sunday, Dec. 23, 2018. (AP Photo/Tony Avelar)

Leaving Philadelphia after playing a key role in the Philly Special that led to defeating Tom Brady and the Patriots to win a Super Bowl was rough for Burton. After four years in Philly, Burton decided he wanted to look for a place where he would get more opportunity.

“Leaving a place like Philly it would be hard for me to not go to a place that has much history and tradition,” Burton said. “Chicago has all of that plus I was looking for a team that had an offense minded head coach because that tends to lead to more opportunity for me. Then you look at the quarterback position, you need someone that can throw you the ball, and I was really sold on Mitch.”

When Burton joined the Chicago Bears, he was instantly seen more of him. Participating in 80 percent of snaps throughout the season, he was able to double his receptions from his 2017 season with 54 receptions. Not only was Burton being targeted more but he was one Mitchell Trubisky’s favorite targets in the end zone. He caught six touchdowns, matching his total from his four years with the Eagles. The fans have also shown love to Burton as he went through his transition.

“The fans are awesome, it’s a lot different from Philly,” Burton said. “Philly fans are known for being Philly fans, but the fans have been welcoming so I definitely enjoyed my first year playing there.”

With the opportunity being given to Burton in Chicago he has also been able to improve on different aspects of his game. Burton sees that his blocking has been one of his major improvements to his game.

“I’m probably the smallest tight end in the NFL so when you look at me you probably think he has no effort or can’t get his head in there,” Burton said. “I played 80 percent of snaps this year but I wouldn’t have been able to play that 80 percent if I wasn’t blocking. I put a lot of work into that and at the end of the day, it’s all about hard work and effort. If you have the mindset that you can beat this guy that is 60 or 70 pounds heavier than you than at least you are going to have a shot.” 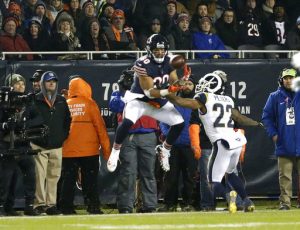 The Bears offensive line was electric this past season allowing players like Tarik Cohen and Trubisky to make key plays. Burton did have his share in the O-line. He also was able to run his routes hard enough where Trubisky was able to reach him.

Burton caught 54 of his 76 targets this year going a career high for 569 yards and six touchdowns. Trubisky and Burton have a strong connection going down in the windy city and fans should be seeing more of them in the 2019 season.