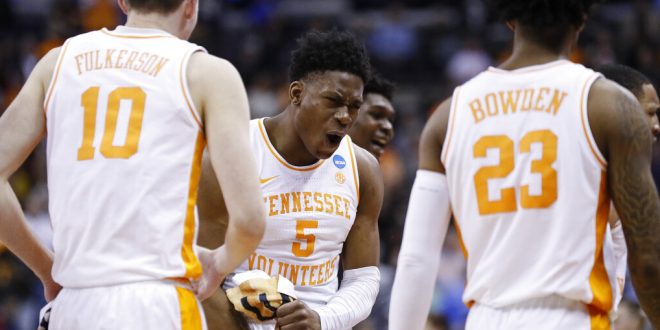 Two vs three. A fitting Sweet 16 matchup in what has turned out to be a pretty chalky tournament so far.

Both teams look to move up to the Elite Eight and have struggled to get over the hump. As with any game in this tournament, only one team will advance. So who will it be?

The Case For Purdue

Guard Carsen Edwards has been the engine that powers the train that is the Boilermakers, averaging 19.3 FG attempts per game and attempting 656 field goals this season.

For reference, Tennessee’s leader in FG attempts is Admiral Schofield with 487. Edwards has scored 68 points in the NCAA tournament, with 42 of those coming off a nice victory against Villanova.

If Tennessee wants any chance of winning their number one goal has to be to shut him down. No engine= no ignition for Purdue.

This is easier said than done, as most teams learn quickly to key in on him defensively.

Edwards has not let this affect his game, explaining that “I just continue to work. I don’t even look or think about the target on my back. I continue to find ways to improve myself, no matter what that is”.

While Edwards is Purdue’s main weapon, other members of the team have been there to back him up all season. Edwards opens up the offense, and his teammates are always ready to capitalize on that.

Even last week against Purdue, the rest of the team hit 17 of 33 shots. Seven of 14 coming from behind the arc. 7 foot 3 big man Matt Haarms could also prove to be a monster, however, his matchup against Tennessee in the past have not in his favor, scoring only two points against the Vols in 2017.

Head coach Matt Painter worries less about the ability to get good shots and focuses more on what to do if they can’t find the bottom of the net. “You want to be able to shoot the ball well and play well on the defensive end, but if that doesn’t work out you have to be able to grind it out.”

Long story short, Purdue is not an underdog in this game. Their potent offense will look to push them out of the Elite Eight droughts they’ve experienced under Painter.

The Case For Tennessee

An interesting thing about this matchup is how close these teams are to each other in almost every category. While Purdue has a slight edge on defense, this Tennessee team is just as lethal on offense.

With high-performance wing play and total domination from senior forward Admiral Schofield, their offense is extremely efficient. Schofield is shooting 41.5% from the three-point line right now, making him tough inside the paint as well as out.

While Purdue leans heavily on Edwards to be the straw that stirs the team, Tennessee has multiple options, even beating Iowa last round 83-77 without Schofield playing in OT.

With Purdue most likely to key in on slowing down Admiral, the Vols must utilize their center, Kyle Alexander.

Although struggling a bit in the second half of the season, Alexander has proved pivotal in games he played well in. He is a huge reason Purdue’s Haarms struggled in their last matchup and looks to provide the same defensive spark on a much bigger stage.

One thing the Vols will have to focus on offensively is preventing costly turnovers. This is something they have struggled with the past couple games and is what has kept their opponents close.

Head coach Rick Barnes noted this in his post-game press conference after the Iowa game, explaining that the game was so close only due to the errors made by the team. “We didn’t do what we wanted to do in terms of coming out and setting the tone.”

If Tennessee can remain efficient and take care of the ball, this game may not be as much of a dog fight as the statistics show. However, Purdue edges them out on defense, so the game has a high chance of staying close.

Tonight’s game tips off at 7:29 p.m. with the winner advancing to the Elite Eight. Tennessee is a one-point favorite.