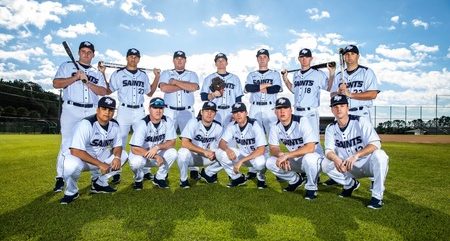 The 4-hour game was filled with ties, lead changes and hits as the Saints were able to take a 2-0 lead in the 3-game series against the Raiders. The Saints will play the Raiders in the final game of the series Friday at Seminole State at 1 p.m.

The Saints found themselves down 2-0, before getting on the scoreboard going up 3-2 in the bottom of the second inning after a couple of big hits by Caleb Stafford and Garrett Mathes.

Santa Fe then fell into a hole in the fourth inning letting Seminole State go up 8-3. The Saints let the Raiders have six runs, five hits, and 11 batters in the top of the fourth, the Raiders getting through the holes of the Saint’s outfield.

10 combined runs between the @santafesaints and Seminole State College Raiders as the Raiders lead 8-7 going into the top of the 5th. @ESPNGainesville

The bottom of the fourth was when the Saints started their fight. Jarrod Cande had a sac fly resulting in Caleb Stafford scoring.

Directly after, Cade Westbrook hit a 2 RBI triple to far centerfield sending two Saints home, followed up by Zeke Malz hitting an RBI single up the middle, making the score 8-7.

The game went back and forth, tying at 10 until Brock Edge hit a ball to left-field that sent Isaiah Perry home to break the final tie of the game. Up 11-10, Jarod Cande had a bases loaded single that brought Kyler Marquis and Brock Edge home to make it a 13-10 lead. A sac fly by Cade Westbrook sent another Saint home, giving the Saints a 14-10 lead.

” Being down 8-3, I’m really proud of our hitters to keep battling,” Santa Fe coach Wiggs said.

Tyler Jones got the win for the Saints, pitching a scoreless seventh and eighth inning. Meanwhile, Garrett Mathes closed out the top of the ninth inning. He only allowed one Raider’s run and struck out the Raiders to seal the deal for the Saints.

The @santafesaints, once down 8-3, come back to win a hard fought battle 14-11! @ESPNGainesville

The Saints now improve to 5-6 in conference play and will look improve that record Friday.

Sasha Stein is a current UF student aspiring to become a sports reporter/broadcaster.
Previous Gators men’s golf returns to competition against steep West Coast field
Next Sweet 16 Preview: No. 2 Tennessee vs No. 3 Purdue

At first, it seemed like it would be a short pause for the Santa Fe …