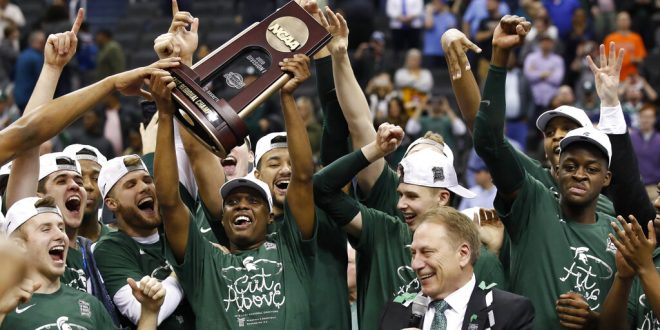 The 2-seeded Spartans knock off top-seeded Duke behind Cassius Winston’s team-high 20 points. Head coach Tom Izzo and company did not let the nation’s top freshman player Zion Williamson get in their way of reaching the Final Four since 2015.

Their 68-67 victory keeps their hopes alive in search of their third national title following their runs in 1979 and 2000.

Surprisingly, this was Izzo’s second win against Duke coach Mike Krzyzewski. He’s currently 2-11 overall in his career against the hall of famer. Izzo admits that it’s not his team’s physical attributes that won him the game, but their mental toughness.

The Big-Ten Player of the year and East Region Most Outstanding Player Cassius Winston never shied away from big moments. Winston dropped a crucial double-double with 20 points and 10 assists. He ended the night shooting 9-23 from the field, but that didn’t get in his way from stamping exclamation marks on each of his scoring drives.

Winston played every single second of the game and assisted on or made 19 of the Spartan’s 30 made field goals.

Zion kept his foot on the gas pedal throughout the entire match. The potential first pick in the 2019 NBA draft scored a phenomenal off-the glass off-hand layup to put Duke up 66-63 with 1:40 left in the game. Zion finished with 24 points and 14 rebounds.

Winston then continued his excellent passing and made an alley-oop dime to Xavier Tillman look easy. Duke was still up 66-65 with 1:17 left.

Barrett couldn’t convert on the other end due to fifth-year senior walk-on Kenny Goins’ defensive prowess and the Spartans grabbed the defensive board with 49 seconds left. Izzo calls a timeout.

The timeout showcased Izzo’s high IQ seconds afterward. Goins missed his first three attempts from beyond the arc before knocking down the most important three-point shot of his career off the timeout as he was left wide open at the top of the key. The go-ahead three-point shot left the game at a stand-still with 34.3 seconds left with the Spartans up 68-66.

Goins is the only remaining player from the 2015 roster when Duke knocked out Michigan State in the Final Four back in 2015.

Today, Duke and Michigan State play for a spot in the Final Four.

The last time they met with the stakes this high was the 2015 Final Four, when it was all Blue Devils. pic.twitter.com/8VojJSWBtS

Spartans’ Xavier Tillman had a huge night as well as he finished with 19 points, 9 rebounds, 3 steals, and 2 blocks and a couple of and-1 baskets.

Duke had the chance to tie the game. Freshman guard RJ Barrett pulled up from deep and hit the front of the iron that eventually was knocked out of bounds by a Spartan with 8.4 seconds left.

Then, Barrett was fouled off a drive to the basket and here’s where it got frustrating for the Blue Devils. Barrett, who shoots 66% from the charity stripe missed the first free-throw attempt. He then tries to intentionally miss the second one but it bounces high off the back of the rim and falls in.

The Blue Devils eventually foul immediately after the Spartans inbounded the ball with 4.7 seconds left. Then, the Big-Ten Player of the year collects the inbound pass and sprints like a Michigan state runningback, dodging and weaving all foul attempts to run out the clock. Winston eventually threw the ball into the air as the buzzer blared into the arena’s atmosphere.

Duke’s roster filled with the nation’s top players were defeated. The 2-seeded Spartans move on.

How did the Spartans Get to this Point?

Izzo breeds success, and 2019 is without a doubt a perfect year to place on his resume to defend that statement. Michigan State has only lost six times this entire year. Dating back to the first game of the season, they lost to then No. 1 ranked Kansas 92-87.  Izzo said after that game that “..this was good for us,” when talking about his team’s defeat.

He later adjusted to a better gameplan and won the next five consecutive games by large margins, including a 101-33 victory over Tennessee Tech.

Michigan State hit a roadblock when they lost to Louisville, then regrouped and won 13 straight games.

Adversity did knock on Izzo’s door midway through the season, as they hit a three-game losing skid to Purdue, Indiana, and Illinois. At the time they were 9-3 in the Big Ten and ranked No. 9 in the AP Top 25 poll.

Illinois fans stormed the court after upsetting a ranked opponent. Mocking the Spartans and throwing the adversity into Izzo and company’s face.

Fast forward 30 days, 1 Big Ten title and nine straight wins, and the Spartans are heading to Minneapolis for their biggest game of the year.

Michigan State now faces sophomore-stud and potential NBA top-5 draft pick Jarret Culver and the 3-seeded Texas Tech Red Raiders. They have five days of preparation before tip-off in Minneapolis on Saturday at 6:09 PM on CBS.

Recent grad from the University of Florida. Editing all articles on here while helping out the newbies. Love all things basketball.
@@MarcoJMartinez_
Previous Gator Baseball Completes Sweep of Alabama With 6-3 win
Next Rays Defeat Astros 3 to 1, Continue Great Start To 2019