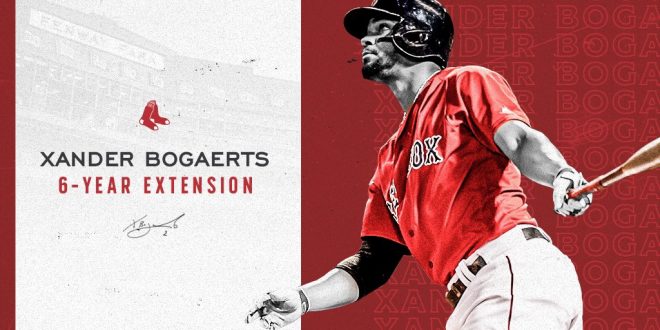 Xander Bogaerts has made his loyalty to the Boston Red Sox organization well known after signing a significant contract extension.

Xander Bogaerts made his MLB debut for the Red Sox back in 2013. During his first year, the team went off to win a World Series and he has proved his loyalty to this team ever since. Bogaerts has recently signed a six-year contract extension with the Red Sox.

The Red Sox picked up Bogaerts back in 2013 as an MLB free agent where he started out with the Pawtucket Redsox Triple-A International League.

He earned his spot as the Boston Red Sox starting shortstop in 2014 in his second year with the team.

The Red Sox shortstop has signed through 2020-25 which guarantees him 132 million after his current contract is up. Bogaerts’ deal also comes with the 12 million that he was guaranteed for this season. He will also have the option of opting out of his contract in 2022.

The president of operations for Red Sox, Dave Dombrowski, has been making a statement by signing recent contract extensions. Prior to this contract, a five- year, 145 million extension was also granted to pitcher Chris Sale.

Xander has been a part of two championships playing with the Red Sox World Series team in 2013 and 2018. The successful start to his career had a big influence in receiving his new contract.

He also helped the Red Sox win a franchise record 108 games during the 2018 regular season. He set a career-high record hitting 23 home runs and 103 RBIs during this same season.

This contract extension seemed inevitable with all the achievements that he has accomplished throughout the years. The Boston Red Sox organization has always felt special to him because of the opportunity the team had given him.

Bogaerts had this to say about signing his extension and on the process it took.

“Decisions have to be made and talking to some great people that are close, great friends and family trying to put it in one text that good for you this is the place that I have accomplished so much and the Red Sox are just a great fit.”

Previous Calipari seals the deal with Kentucky
Next Before The Clock Struck Midnight: Ranking The Top 7 Cinderella Teams Over The Past Five Years