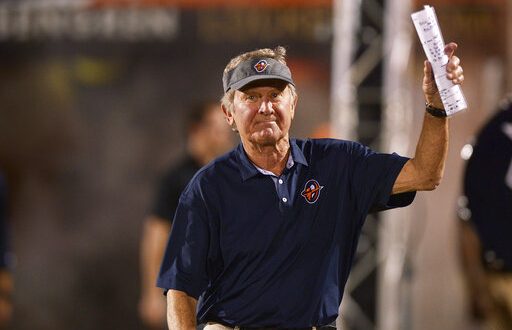 The Alliance of American Football suspended all operations on April 2, just eight weeks into the inaugural season. And with two weeks left in the opening season, it’s quite possible operations could be suspended indefinitely. While the shut down affects players across all eight teams in the AAF, it affects the coaches, too.

Steve Spurrier, head coach of the Orlando Apollos, expressed his disappointment of the shutdown on Tuesday. He issued a statement with General Manager Tim Ruskell and Team President Michael Waddell.

The three wrote that “while all startups encounter some challenges, we believed we could address ours in the offseason after bringing the City of Orlando a championship and a successful completion to the league’s first season.”

Spurrier’s season with the Apollos

Spurrier arguably coached the most talented AAF team in the league. In the eight weeks of season, the Orlando Apollos ended 7-1. The team’s one loss came from the Arizona Hotshots.

However, with the league likely over, there’s no chance for the eight teams to battle for a championship. So, Spurrier believed it should be his Apollos that are crowned the champions. Even with his disappointment in the unfolding of the league, he felt that his players deserved the title of “champs.”

Offensively, the team was led by Garret Gilbert and Charles Johnson. Quarterback Gilbert threw for over 2,100 yards in just eight games – a pretty impressive stat. He totaled 13 touchdowns on the season. And Johnson, a 6-foot-2-inch wide receiver, had nearly 700 receiving yards. Meanwhile, running back D’Ernest Johnson rushed for 372 yards. De’Veon Smith was close behind with 345.

On the defensive end, Will Hill III stepped up big time. In the eight-game season, he totaled 35 tackles. The defensive back from UF made his presence known in the AAF.

So, it’s no surprise Spurrier was impressed with the high amount of effort his players put out this season.

It will be interesting to see where all the players in the AAF go from here.