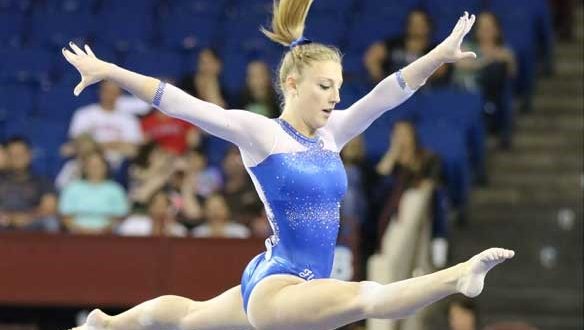 Gymnastics is full of incredible technique, straight lines and performance quality. All of these things go into creating the perfect routine. Near perfect routines are hard to come by but these athletes have perfected the art of sticking the landing and wowing the crowd.

The athletes on this list have become household names, Olympic athletes and gymnastics icons. Here are five of the all-time best gymnastics routines.

The rankings are based on multiple criteria including:

This beam routine from Alyssa Baumann helped the Florida Gators reach second place in the 2018 SEC Gymnastics championships. This performance would also win her the 2018 SEC beam title. One judge gave Baumann that perfect 10.0, however, the other judge found something in that routine that was only worth a 9.95.

Baumann’s beam routine is filled with difficulty. This routine even includes an anode which is one of the hardest skills to compete on the beam. Her required tumbling pass was near perfection and to top it all off, her feet never moved on the landing.

Baumann typically only competes on floor and beam but is always there to step up when her team needs her. Even though she is only a sophomore now, Baumann has already amassed multiple collegiate titles including being a two-time All American, being the 2018 SEC balance beam champion and being named to the 2018 SEC All-Freshman Team.

The meet started off good for MaKenna Merrell-Giles with a perfect 10.0 on her vault. However, the day would only get better as she went on to win the All-Around title as well and help Utah get a 197.700 to 196.250 victory over Washington. This was her first 10 ever on any event.

This vault was everything that the judges were looking for. An extremely high level of difficulty with beautiful technique led to an amazing stuck landing for Giles. Her high-performance quality was shone through as well.

During her time at Utah, Giles received numerous accolades including being a six-time All-American, being regional floor champion and PAC-12 vault champion. Her career-high 39.675 all-around is also tied for the ninth-best in school history.

This perfect 10.0 from Myia Hambrick would be the second 10.0 of the night for LSU, but only by a few minutes. Just moments before, teammate Sarah Finnegan received a perfect score for her floor routine as well. Back to back 10s on floor is something that has never happened for LSU. This 10.0 would help LSU defeat Auburn with a final score of 198.100-195.625.

The stuck landings in this routine were so amazing that Hambrick only had to take a small step back on one of her passes, which is still allowed without deduction. The level of difficulty and technique in this routine is insane, along with her performance quality.

Hambrick has been a powerhouse during her time at LSU. She is a 20-time All-American, which is the second-most in school history. She earned All-SEC honors all four seasons and ended her career in the top-10 of LSU’s career titles rankings on vault, floor and in the all-around

There is no arguing that this vault was not a perfect stuck landing. Dowell’s technique was perfect throughout the air and even after she landed. The yurchenko one and a half is one of the more difficult vaults to compete and Dowell did it to perfection with amazing performance quality.

Dowell has raked in the accomplishments while competing at Oklahoma. Some of her accomplishments include being the Co-Individual National Champion on vault and 2018 Big 12 Co-Floor Champion. Dowell even deferred her sophomore year at Oklahoma to pursue a spot on the U.S. Senior National Team for the World Championships.

The last routine of the night was a knock-out from Kennedy Baker. Baker’s 10.0 on floor helped the Florida Gators reach an overall 197.85, the fifth highest score in the country for 2018. This meet against Alabama would be Florida’s best floor performance of the season thus far, finishing with a 49.625. This performance slammed home Florida’s 197.85 – 197.075 win over Alabama.

Baker’s performance quality has always been one of her best features. However, this is not where it ends on this routine. Her tumbling passes are sky-high and extremely difficult. Each of her tumbling passes also ended with a beautiful stuck landing.

This performance would be her third 10.0 on floor during her career at Florida. She was an 11-time All American, and a three-time SEC Champion. She also shares the school record for career 10’s on floor.

This perfect routine from Maggie Nichols helped send the Oklahoma Sooners into the NCAA Championship for the 15th consecutive season. The routine would also win Nichols the beam title and would help her win the all-around title with a 39.775.

Nichols’ performance quality is always spot on. As a member of the USA National team, her level of difficulty is extremely high and her technique is among the best in the sport. Her required tumbling pass had no bobbles and she ended the routine with a beautiful stuck landing.

Even though in 2018 she was only is a sophomore, Nichols has had a tremendous impact on the Oklahoma team. Nichols has already achieved her Gym Slam and holds a program high with a 39.925 on All Around. She is also the 2018 NCAA All-Around Champion.

Peng-Peng Lee needed a 9.975 to help her team win the NCAA 2017 Gymnastics National Championship. She got the perfect 10.0. Teammate Madison Kocian had fallen earlier on beam so the pressure was turned up even more. This wasn’t her only 10.0 of the night, however. Her first 10.0 came earlier in the evening on the uneven bars after an okay performance on vault by UCLA.

This beam routine was amazing, to say the least. After the fall from Kocian, the pressure was on for everyone to do their best, and Lee delivered. This routine is filled with extremely difficult and creative elements that wow the crowd. Her performance quality is almost unmatchable and her flawless technique leads to the stuck landing to wrap up the routine.

Lee’s first two years on the team were plagued with injury. In 2013, she redshirted while she recovered from knee surgery. However, she missed the 2014 season as well after having to undergo a second knee surgery. Finally, in 2015 she was able to compete in her first season with the Bruins. But then in 2016, she would miss five meets from another knee injury.

Even though her time at UCLA has been filled with injury, she still managed to receive numerous awards for her outstanding gymnastics. She was a nine-time All-American, 2018 NCAA Balance Beam Champion, 2018 Honda Sport Award Winner and 2018 Pac-12 Co-Woman of the Year

Sarah Finnegan has brought a lot of power to the LSU gymnastics team. She is even only missing one more 10 on Vault to complete her Gym Slam- recording a 10 on all four apparatuses. This perfect 10 against Arizona would just be the start to Finnegan’s night as she later recorded a perfect score on beam as well.

This bar routine from Finnegan was simply amazing. Finnegan completes routines that are at the highest of difficulty. Her technique is among the best in the NCAA along with her performance quality. And to top off an awesome routine, her stuck landing seals the deal for a perfect score.

Finnegan has definitely made the most of her time at LSU. 2018 was no less of a year for her than her first two years at LSU. In 2018 she was named SEC Gymnast of the Year, Central Region Gymnast of the Year and a Honda Sports Award Finalist. During high school, she was even an alternate for the U.S. Gymnastics Olympic team in 2012.

Alex McMurtry was a star during her time at the University of Florida. Even though she was plagued with injuries during her time and could only practice once or twice a week, she always shined during the meets. This perfect 10 was her second of the night after also receiving a perfect score for her vault routine.

This perfect 10 on beam was the first perfect score that McMurtry had received on beam and completed her Gym Slam. The landing was beautiful, the level of difficulty was one of the hardest possible, the technique was impeccable and her tumbling was amazing, to say the least.

McMurtry’s time at Florida was filled with success. The number of awards and accolades she received are nearly endless. These include the 2017 Honda Award, 2017 NCAA All-Around & Uneven Bars, 2018 Vault champion, and 2017 SEC Gymnast of the Year. To top it off, she was also a 22-time All-American during her time at Florida.

After taking a break from gymnastics following the physical and mental damage the sport caused her, Katelyn Ohashi has broken the internet with her steller Michael Jackson floor routine. Ohashi received multiple perfect scores for this floor routine last season.

This routine ranks highly for each of the criteria. The level of difficulty is close to insane, the tumbling passes all lead to amazing stuck landings, and the performance quality is stellar.

Ohashi is the 2018 NCAA and Pac-12 Floor Exercise Co-Champion as well as being a member of the 2018 NCCA National Championship team. She finished the regular season ranked No. 1 in the nation on floor exercise. She has recorded five perfect 10’s during her time at UCLA (three on floor and two on balance beam) and was a four-time USA National team member.