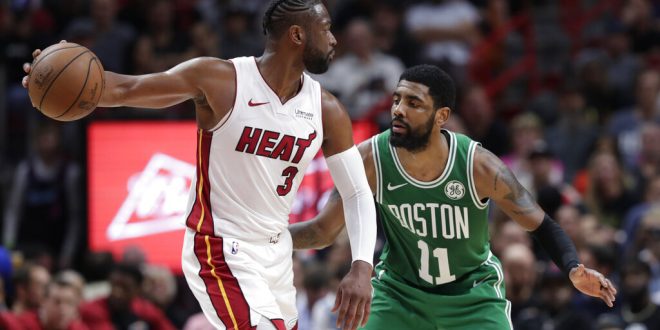 The Miami Heat was unable to take advantage of an opportunity to jump into the sixth seed in the NBA’s Eastern Conference playoff race with four regular season games to go. Miami lost 112-102 to the Boston Celtics at home last night after losing to Boston on April Fool’s Day. The jokes are over, but the implications are serious, as the Orlando Magic handled the New York Knicks 114-100 and temporarily has Miami out of the playoffs.

Taking A lot of Heat

Orlando is 8-2 in its last 10 games, getting six of its wins versus teams with now-losing records—including Miami. Erik Spoelstra’s team has not been able to compete with them for the eighth seed as of late, winning only six of their last 10. A big factor has been the Heat’s strong remaining schedule, which featured mostly playoff teams. Just in the Eastern Conference, Miami is 2-14 against the top five teams. To make matters worse for Heat fans, two of the last four games come against the Toronto Raptors (0-3) and the Philadelphia 76ers (0-2).

Moving on, Miami, the league’s most common team to run a zone defense, did exactly that Wednesday night. However, Boston managed to get around and through the zone instead of pushing the pace and forcing turnovers (47.5 percent shooting and 12 turnovers). Additionally, Miami was not efficient again from the free-throw line, hitting 12 of 20 compared to Boston’s 27 of 31.

Another recurring problem happened last night; Miami was unable to win at home or finish in the fourth quarter. Miami was only down 83-81 at the end of three and kept it a four-point game with under four minutes to go. Nonetheless, the Celtics came out superior as Gordon Hayward and Kyrie Irving combined for 48 points overall to win. The Heat is now 18-22 at home compared to 20-18 on the road.

A major issue lately has been the Heat not being fully healthy. Justise Winslow came back after being out the last nine games, yet leading scorer Josh Richardson went out with a leg injury midway through the third.

Miami Heat guard Dwyane Wade, a player with his own past of various serious injuries, hopes J-Rich is ok.

“I was obviously concerned when he left the game,” Wade said. “At first you just thought maybe he got hit the wrong way. But the way he left the game, you knew it wasn’t. So we’re definitely concerned about him. This time of the year is a bad time for injuries, but hopefully he’s fine.”

Miami heads on a two game road trip beginning in Minnesota on Friday. The team lost its only other meeting with the Timberwolves 113-104 to end 2019. Moving on, the Heat will not get any luckier, facing the Toronto Raptors for the fourth time this season Sunday. In three losses, Miami has been outscored by 33 points combined, with the 106-104 loss being the only close result. Returning home, Miami welcomes the Philadelphia 76ers back to American Airlines Arena Tuesday—another team the Heat have not beaten this year. Lastly, in a potential playoff deciding game, the Heat heads to the Barclays Center to take on the Brooklyn Nets.