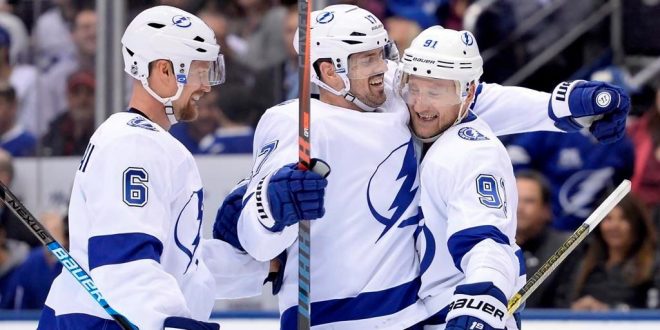 The overall atmosphere of Thursday’s match was one that suggested the playoff potential of the Lightning and the Maple Leafs. A low score and Lightning comeback gave the match a specific energy that one expects to find in a playoff game.

Despite the abysmal loss to Montreal, the Lightning was able to get the “tune-up” they needed on Thursday, as Alex Killorn called it. The high-strung tension and ferocity of Thursday’s match are what makes playoff games feel like playoff games. It’s exactly the kind of atmosphere the Lightning can expect in the future.

Throughout the match, the Lightning showcased their playoff potential. That is, the score was their main indicator.

The Maple Leafs scored an early goal in the first thanks to Mitchell Marner and held the lead for a short while. Both teams seemed fine with feeling each other’s capabilities out throughout the first. As time wound down in the first period, both teams made plenty of turnovers in the neutral zone. At the end of 20 minutes, the Lightning had the most control of the puck and led in shots and expected goals, but still trailed 1-0.

That was until the Lightning’s Steven Stamkos was able to tie it up at the start of the second.

Heck of a way to tie it up, Stammer.#TBLvsTOR | #GoBolts pic.twitter.com/2wEkfoLBZ8

Immediately after, Patrick Marleau took an opportunity on a power play by getting on a breakaway equal to Stamkos’. Unfortunately for Marleau, he was met with the nearly unbreakable wall that is Andrei Vasilevskiy, who saved the shot to keep the game tied.

The best chance for the Lightning to score in the second period came when Ondrej Palat made a slight pass to Stamkos on his own. Despite the similar scoring situation, Frederik Andersen for the Maple Leafs made the save.

Ten minutes left in regulation and we’re still knotted at one.

How’s everyone doing? We’re keeping an eye on this dole whip convo in our mentions… #TBLvsTOR

Both goalies stayed on their toes and held the game to 1-1 throughout the third. It wasn’t until the second half of the period did the two teams start gunning for the win. It quickly became a game of “who’s going to score first?”.

In fact, the Lightning answered that question with ease. Killorn made a quick pass to Stammer who worked his way toward the goal before dropping the pass back to Killorn for the dagger shot. The puck shot past Andersen for the win.

The Maple Leafs gathered together for one last blitz around the net with just two minutes remaining. Despite the effort, Vasilevskiy held strong. With time ticking off the clock Kucherov scored an empty net goal at the last minute to mark his 126th point of the season.

This made him pass Joe Thornton (2005-2006) for the salary cap era record. It also marked his 40th goal of the season, making the Lighting the first team to have three 40 goal scorers since the 1995-1996 Pittsburgh Penguins.

The @TBLightning became the first team to feature three 40-goal scorers in a season since Pittsburgh in 1995-96 (Mario Lemieux, Jaromir Jagr and Petr Nedved). #NHLStats pic.twitter.com/hGcfxQDjiw

Killorn stated that the team needed this win as a way to refresh their skills.

As the playoffs loom over next week, the Lightning have set their sights set on one last team. The Lightning travel to Boston to face off against the Boston Bruins tomorrow afternoon at 1.