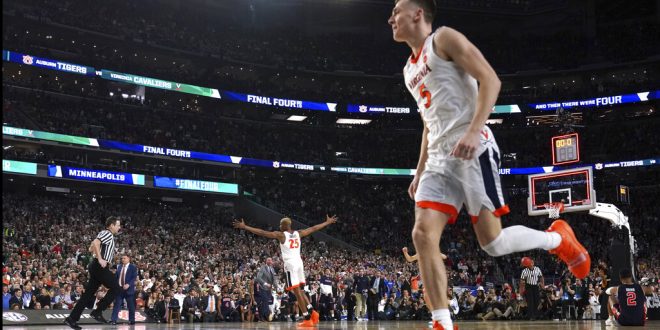 For the first time since the Florida Gators did it in 2006, there will be a first time men’s basketball champion crowned tonight.

Virginia and Texas Tech will battle tonight in Minneapolis for all the marbles. It’s unfamiliar territory for both schools, as each team is in the national championship game for the first time in school history.

Both teams have used their elite defenses to help them get to Minneapolis.

Virginia is coming off arguably the most controversial game of the tournament. The Hoos defeated Auburn 63-62 Saturday night in the first national semifinal after Kyle Guy was fouled on a three-point attempt with 0.6 seconds left, and Virginia down by two. Guy nailed all three free throws to give the Tigers a heartbreaking defeat.

Title on the Line

With points at a premium, both teams are going to rely on their big playmakers to come through.

That start’s with each team’s NBA talents: Jarrett Culver for Texas Tech, and De’Andre Hunter for Virginia.

Culver was quiet for long stretches against Michigan State but came alive in the final minutes. Six of his ten points came in a personal 6-0 run to put Texas Tech up by seven after Michigan State cut the lead to 52-51.

The Red Raiders will need those clutch points to come throughout the game, as they likely can’t afford another 10 point performance from the projected top-10 pick. Lucky for Chris Beard and his squad, Saturday’s game appears to be more an exception than the rule. Culver has excelled so far in the tournament, averaging 19.2 points and 6.4 rebounds per game.

The same can’t be said for Virginia’s Hunter. The projected lottery pick averaged almost 15 points per game during the season but is averaging 11.3 points during the tournament. After a first-round game, in which he dropped 23 points, he struggled from the field in the proceeding three games. However, he bounced back with a solid stat line against Auburn. He finished with 14 points on 63 percent shooting.

The two stars will need help though. Culver will hope that Mooney can come through with another hot shooting night, while Guy and Ty Jerome have been Hunter’s right-hand men all season.

Tonight’s game will take place at U.S. Bank Stadium in Minneapolis. Tipoff is set for 9:20 p.m. ET on CBS.