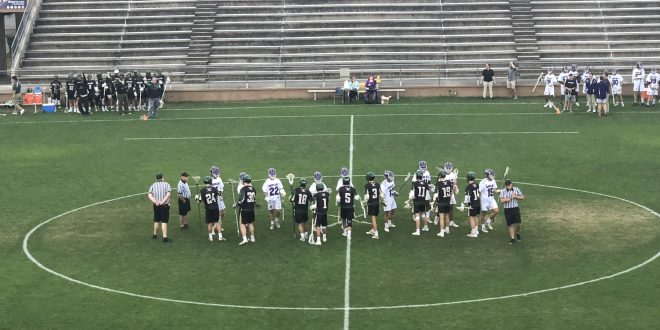 Gainesville Falls To Lincoln In Boy’s Lacrosse Despite Late Rally

The Gainesville Hurricanes lost 16-13 to the Lincoln Trojans in a high-scoring boy’s varsity lacrosse game.

Gainesville came into the game with a 6-6 record on the season with a 2-3 district record. The Hurricanes were recently eliminated from competing in the District 3 lacrosse tournament and looked to defeat Lincoln High School in their second to last game of the season.

Gainesville Took An Early Lead in the First Quarter

After opening the game down 2-1, Gainesville scored four unanswered points to jump out to a 5-2 lead in the first quarter. The Hurricanes scoring run was led senior midfielder/defender Demondre Butler, who scored back to back goals with five minutes left in the quarter.

The Hurricanes struggled to stop the star senior attack for Lincoln, Caleb Gehres. Averaging four goals per game on the season, Gehres finished the night with seven goals total for the Trojans bringing his season total to 57 goals.

A whopping 10 goals were scored in the third quarter combined with Lincoln accounting for seven of the goals in the quarter, two of which came from Demondre Butler. The one-sided third quarter gave the Trojans with a 14-9 lead heading into the fourth quarter.

Gainesville found some energy in the fourth quarter behind senior Jacquez Wallace. Being one of 13 seniors with only two games left in the season, Wallace scored one of his three goals to spark a four-point quarter.  The late run was not enough however for Gainesville to pull out the win.

Despite the loss, Gainesville coach Evan Milch had quite a positive outlook on the game and program as a whole.

“I think this team was really good,” said Milch. “To make it a three-goal game between a team that no one thought we had a chance with says a lot about the character of these kids and the culture we’ve built here as a program.”

Gainesville will be celebrating its Senior Night on Wednesday at home against Paxton School For Advanced Studies, where the Hurricanes will look to win their final game of the season.