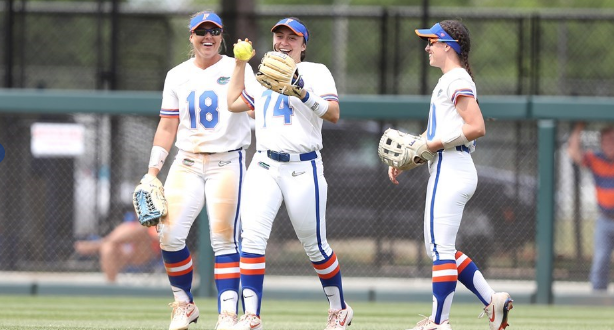 Florida ends its five-game home stint against a familiar foe. The sixth-ranked Gators play host to the South Florida Bulls at 7 p.m. Wednesday.

This is the second-to-last midweek matchup for Florida and the last it will have in the friendly confines of Katie Seashole Pressly Stadium.

The Gators and Bulls squared off on the second day of the season on Feb. 10 at the USF Opening Weekend Invitational. Hannah Adams, Jaimie Hoover and Danielle Romanello each went yard in the 7-1 win.

UF enters the game at .500 in the SEC after a home sweep of the Arkansas Razorbacks. Albeit, the record doesn’t have as much to do with the Bulls as the way Florida won those games does.

For a moment, it seems the Gators offense is coming around. Florida hit .279 as a team against Arkansas but most of the hits came during Saturday’s 8-0 victory.

Head Coach Tim Walton inserted shortstop Sophia Reynoso into the cleanup spot for the Gators. He said it was mostly due to her on-base percentage.

Walton on moving up Reynoso:

USF is similar to that of Ole Miss on offense and defense. The Bulls don’t boast a top five offense in the American Athletic Conference but are active on the bases.

The Bulls have the lowest team batting average in the league at .257, but junior AnaMarie Bruni is tied for third in average at .381. Bruni also leads the league in hits and stolen bases.

South Florida leads the AAC with 49 stolen bases on 61 attempts this season. That could be a problem for a Florida defense that allowed 18 stolen bases and only caught five runners so far this season.

Ken Eriksen’s pitching staff is one of the best in the AAC. The Bulls are among the league leaders in the following categories:

One thing Bulls pitchers struggle with is the longball at 26 allowed home runs. Florida is ninth in the SEC in home runs hit at 42 with multiple coming from the Arkansas series.

After this game, Florida will be back on the road for a conference series against the Texas A&M Aggies.

Fans can stream or watch the game against USF on the SEC Network at 7 p.m.

Previous Winston, Bucs ready for fresh start under Arians
Next Tiger Woods ready for 22nd appearance at The Masters