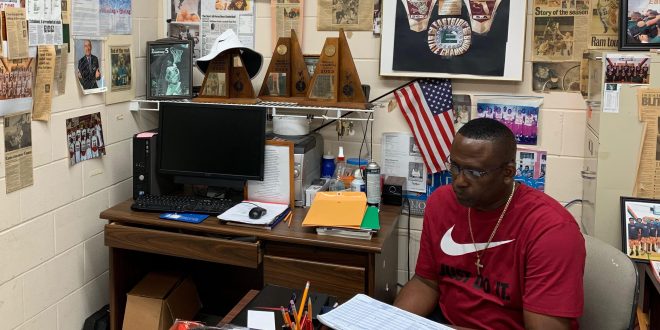 Passionate Pop: Coach "Pop" Williams puts together his game plans in his office, surrounded by photos and articles of his career.

As a bold 14-year-old, Herman “Pop” Williams got a ride home from a police officer after he was told to stop some rough play with a slingshot.

“I’ll never forget that. I got a whooping so bad, I couldn’t sit down for a while. That right there woke me up,” Williams said. “I didn’t do anything major, but I disrespected this old lady and she told me to stop. That brought a whole different perspective about respecting people and doing what’s right.”

That moment would lay the foundation for the 38 year-long coaching career that Williams has had so far.

Currently, Williams, 56, has surpassed 500 wins in his 22 years as the head coach of the men’s varsity basketball team at Eastside High School. During his career at Eastside, he won the state championship in 2006.

“You gotta be mentally tough,” said senior Emontea Shannon. “He’s gonna ride you all season long until he can get the best up out of you and then he wants more.”

Williams has been around Gainesville his entire life and considers himself a protégé of the city. He attended Eastside and then went on to Santa Fe College for two years.

“I’ve just always been a neighborhood guy just doing stuff around the city; for the recreation department or putting on basketball camps,” Williams said. “My life has always been growing up around basketball.”

During his youth, Williams started playing basketball for the first time at the Boys and Girls Club of Alachua County. This same club would also grant him his first opportunity at coaching.

“They had a program at the Boys’ Club that if you were 13-years-old, you got to coach the six and the seven-year-olds because they didn’t want the older coaches dealing with the younger kids,” Williams said. “I kind of liked it and then started moving up.”

Williams’ coaching days wouldn’t stop there. He continued to play basketball at the high school level and graduated from Eastside in 1981. 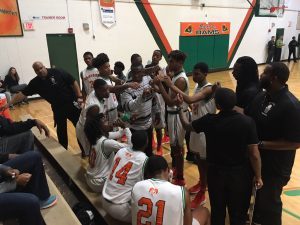 After graduating from high school, Williams went on to Santa Fe College while simultaneously coaching a league of 15 and 16-year-olds at the Boys’ Club.

“I always dreamt of being a high school coach but I never thought I would be. I didn’t really go to college and finish up my degree,” Williams said. “I used to always listen to people tell me I couldn’t be a coach, but I never doubted myself. “

Two years passed at Santa Fe college when Williams was contacted by his old coach, Mike Kirkman, to coach the men’s freshman basketball team at Eastside.

That was the position that launched Williams’ career at Eastside. Williams then went on to coach both men’s and women’s junior varsity basketball teams before receiving an offer to be the head coach of the men’s varsity team in 1996.

“I was the JV coach at the time and Randall Leath left. I was a neighborhood protege,” Williams said. “They asked me if I’d like to be a coach, but I was scared of the challenge and I saw what Leath went through.”

Williams finally accepted the position after receiving calls from former players and parents of current players asking him to take the position.

“They were so happy because they got somebody that went to Eastside and who really cares about Eastside and that’s where it all started,” Williams said.

Shortly after taking the position, the administration at Eastside attempted to get the players to call him Coach Williams, but nothing could get people to stop calling him “Pop.”

“Everybody asks me that. My momma said when I was small I used to pop bubbles. Every time she looked at me, I had a bubble in my mouth and it just pops,” Williams said. “When I first got the job they wanted people to call me Coach Williams. The school couldn’t even do it.”

Humble in his roots, Williams gives credit to the community and his players for the team’s success.

A combination of discipline and kindness is what Williams instills into all of his players.

“One thing about me; you gotta let kids be kids,” Williams said. “When you under my watch, you’re gonna do it my way. I can’t control what you do at home.”

The almost four-decade-long coaching career could be coming to an end anytime in the next few years. Williams feels that it’s time for someone new to build their own philosophy at Eastside.

“Being positive and doing the right thing, it helps my life a lot to understand how valuable life and discipline are,” Williams said.