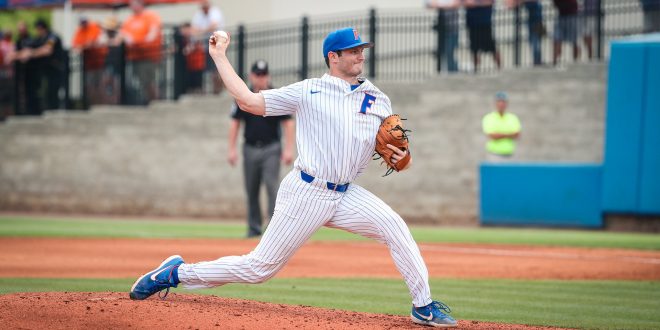 Overall in the series, LSU leads, 62-50-1 but in 2017, Florida went 4-1 against LSU- winning the regular season series in Gainesville and sweeping the Tigers 2-0 in the 2017 College World Series Finals to win their first NCAA title.

After going 3-1 with a series win over South Carolina, Florida’s weekend rotation is changing up a bit.

Tommy Mace finished his start against the Gamecocks last weekend after six innings, allowing three hits and two runs. Florida pitcher Jack Leftwich who has been dealing with a blister after missing his last two starts will be available against LSU.

Christian Scott suffered his second straight rough start against an SEC team last weekend against the Gamecocks. The freshman was tagged for six earned runs in the second game to Ole Miss as the same thing happened when he started last weekend.

Lang With A Bang

A Look at LSU

The Tigers are 9-6 in the Southeastern Conference, and the Tigers are just one game behind first-place Georgia and Mississippi State in the overall league standings.

Senior right fielder Antoine Duplantis has 312 career hits at LSU and has a chance to become the all-time hits leader in school’s history. Duplantis collected his 15th career triple in the Missouri series.

Additionally, right-hander Zack Hess also has a chance to pitch this weekend. He suffered a pulled groin muscle in the first inning at Missouri. Lastly, right-hander Todd Peterson who earned his third win of the season is one to watch as he worked three perfect innings with five strikeouts at Missouri to give him the victory.