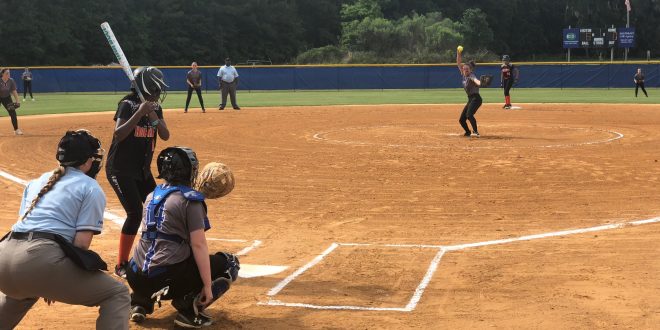 The Saint Fracis Catholic seniors are honored at senior in their game of the season. @ESPNGainesville pic.twitter.com/3S0iUqf5vz

Hawthorne High School entered the game with a record of 4-8. The Hornets defeated the Saint Francis Wolves 19-2 in their last matchup and looked to complete the season sweep with another win.

The Saint Francis Catholic High Wolves had a record of 1-16 entering the game. The Wolves celebrated their two senior athletes with senior night before the first pitch.

Senior Erika Brockish started the game on the mound for Saint Francis Catholic. Entering the game, Brockish had an ERA of 33.67 and a record of 0-5. Brockish struggled early to find the strike zone in the top of the first inning as she walked seven batters.

With a 14-0 lead and one out in the first inning, the Hawthorn Hawks were one out away from reaching the mercy rule of 15 runs. With such a commanding lead on Saint Francis’ senior night, coach Erik Boggs decided sportsmanship was much more important to himself than winning.

“It’s all about sportsmanship,” said Coach Erik Boggs.  “We just want to show that at all times.”

Hawthorne elected to end the inning with runners on first and second base rather than keep watching the Wolves struggle to gain two more outs. Not only did Hawthorne end the inning, but the Hornets did not steal another base for the rest of the game.

The Wolves fell to the Hawthorne 22-5 in the three-inning mercy rule. The senior night marked the final game for the Wolves as their season came to an end.

While displaying exceptional sportsmanship, Hawthorne picked up a win as they approach the district tournament. The Hornets’ final game of the regular season will be at Eastside on Friday at 6 p.m.

Previous The Baltimore Ravens prepare for a promising year
Next Gator Baseball Preview: Florida And LSU Square Off In Baton Rouge