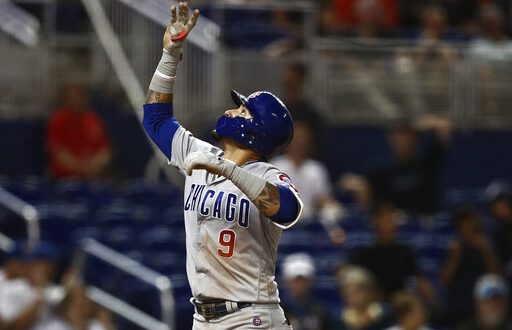 Coming into the 2019 season, there weren’t many in Miami excited for the season. The biggest headlines about the team heading into the season didn’t have to do with the play on the field. The main excitement came from new uniforms and a revamped Marlins Park.

Despite these enhancements, watching Marlins baseball hasn’t been easy this season. Tuesday night’s was one of those nights for Marlins fans to endure. The Chicago Cubs blanked the Marlins 4-0, dropping the Marlins to 4-14 on the year with no signs of improvement any time soon.

Cubs pitcher Jose Quintana continued his recent dominance on the mound Tuesday night. He extended his streak of scoreless innings pitched to 14. Against the Marlins, Quintana went seven innings only allowing six hits and striking out seven. It wasn’t until a double from Marlins left fielder Austin Dean in the seventh where a runner made it to second base.

The Marlins hitters made it easy for Quintana to excel. They drew only one walk combined. Miami only had two instances with runners in scoring position.

While the Marlins batters floundered, the Chicago bats pounced on the young Miami pitching staff.

Cubs shortstop Javier Baez also continued his early season success in Miami. He finished the night going three for four from the plate, including a home run in the eighth inning to put Chicago up 3-0.

The Cubs got on the board early with a RBI single from second baseman Daniel Descalso in the third. Then, with the bases loaded in the fourth, third baseman Daniel Bote drove in Baez on a sacrifice  to give the Cubs a 2-0 lead.

It’s safe to say everything is wrong with the Marlins right now. At the plate, Miami is close to the bottom in every statistical category. They are ranked 12th in the NL in team batting average (.212) and in on-base percentage (.281). The Marlins are dead last in the National League in runs with just 47 and in hits with only 105.

The stats aren’t that much better on the mound for Miami. Marlins pitchers have given up 88 runs in 18 games, which is the fourth highest total in the NL. They hold the fifth worst ERA in the NL with a combined ERA of 4.89.

The only thing Marlins fans can find excitement in this season is the development of young talent. The pitching staff is loaded with starters who show promise such as Sandy Alcantara and Caleb Smith. In the lineup, the emergence of catcher Jorge Alfaro (.310 BA 3 HRs) has been welcomed sign of progress.

Alcantara will take the mound for the “Fighting Fish” tonight as they try to prevent yet another series sweep. He comes into this one with a 1-1 record on the year with a 4.24 ERA. Despite the numbers, fans are excited to see his development. He goes up against a proven force in Cole Hamels. In his last outing on Friday, Hamels dominated the Los Angeles Angels. He went eight innings only allowing one run, striking out six, and not giving up a single walk.

If the Marlins suffer their fourth straight loss tonight, it would be the third sweep of the season for Miami.

First pitch from Marlins Park is set for 7:10 p.m.