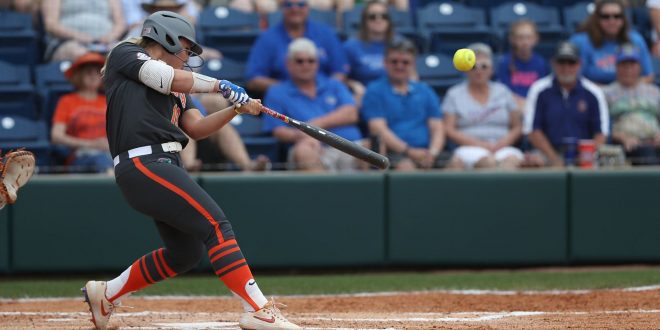 Amanda Lorenz hits a leadoff homer in the first game against Syracuse on Sunday. This is her fourth leadoff homerun on the season and she had two over the weekend. Credit: floridagators.com

It is rare, nearly impossible in fact, for two players from the same college team to earn the first and second selections in any professional draft. The Florida Gators joined that short list of elites Monday night when Kelly Barnhill and Amanda Lorenz were the first names called in the NPF Draft.

The entire team gathered in a small dressing room while attending the Florida Letterman Awards to watch the draft. The watch party didn’t last long.

Barnhill went No. 1 overall to the Chicago Bandits, with the USSSA Pride following shortly behind to take Lorenz.

As the room filled with cheers of joy, Barnhill stood there silently, taking in the surreal moment.

“To be part of the 25 that were drafted, it was so amazing,” Barnhill said. “Especially being there with my teammates and having their support. It was such a special moment for me.”

Barnhill pitched her way to USA Softball Collegiate National Player of the Year honors in 2017 as well as SEC Pitcher of the Year honors in each of the last two seasons. She’s hit a couple of bumps 2019 but remains dominant with 242 strikeouts in 174.2 innings. Despite leading the SEC in innings pitched, she’s given up the lowest batting average at just .152.

Lorenz’ stats impress just as much. The two-time All-American and 2018 SEC Player of the Year is as consistent as they come. She batted above .400 in two of her first three seasons (.388 as a sophomore) and is on pace to do it again.

The senior left fielder turned first baseman leads the team in nearly every offensive category. A .416 batting average, .544 on-base percentage, 40 runs, and 38 walks are just a few of those numbers.

Barnhill and Lorenz might be the first Florida players drafted so highly, but they join several former teammates.

The Bandits also selected Aleshia Ocasio a year ago. Meanwhile, Lorenz reunites with Nicole DeWitt and Kirsti Merritt on the Pride.

“Nicole and Kirstie are a few of my favorite teammates of all time,” Lorenz said. “I’m really, really excited to keep learning from them and playing by them, because I’ve always known those girls have had my back. That’s really comforting to know that you have girls like that in your corner, so I’m really excited to play with them again.”

The pair came to Florida as the top two players in the country, and they will exit the same way. Lorenz isn’t quite ready for her send-off yet, but she credits head coach Tim Walton and the program for her outstanding success.

“I think it’s just a testament to Coach Walton and the culture here. We love this place a lot, and I’m just thankful that we get to be representatives of the Gators and we get to be one and two for the University of Florida. I think that’s just really special. I’m more proud just for our university that we get to represent them like that.”