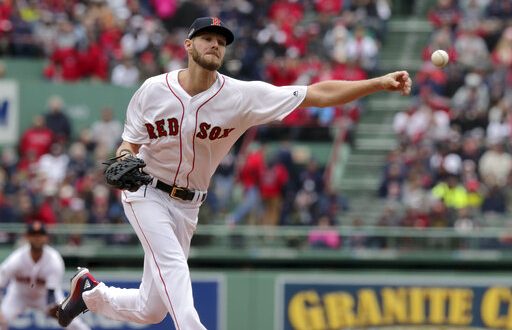 As the MLB is still in the first month of the season, it hasn’t been the greatest of starts for the defending champions, the Boston Red Sox.

Three weeks into the season, the Red Sox are currently 6-12, 7.5 games behind first place in the American League East.

As the team is struggling to start the season, so is their ace. It has not been the start to the season on the mound Chris Sale wanted.

Sale is 0-4 to start the year, with a lackluster ERA of 8.50. In his four starts, Sale only has one quality start.

In his most recent outing Tuesday, Sale was touched for four runs against the New York Yankees and was charged with the loss.

As Boston went on to win the Fall Classic last year, Sale was an integral part in their success. He finished the regular season with 12 wins and an ERA OF 2.11. In 2018, Sale had just four losses the whole season, as many as he already has this year.

Sale’s numbers last year were good enough to have him in contention for the AL Cy Young award. As a result of his 2018 campaign, the organization signed Sale to a 5-year, $145 million contract extension in March.

Sale’s struggles fall on his shoulders and he’s well aware of it. After his outing against the Red Sox’ greatest rival, the Yankees, Sale didn’t hold back on his frustrations.

Chris Sale isn't make excuses for his poor start to the seasonhttps://t.co/2n0wFmdPrI

One of the reason’s for Sale’s early struggle is his fastball. Known for throwing a lively-fastball throughout his career, Sale isn’t hitting the radar-gun the same way. This year, his fastball is averaging 91 MPH and Sale is usually someone who hits 95-to-96 MPH with ease.

Despite his struggles, Sale is still receiving support from his teammates and manager. He might have picked up the loss against the Yankees, but Boston manager Alex Cora saw some positive things out of Sale.

The Red Sox and Sale will hope that his most recent showing will be a sign of things to come. If Boston has hopes of repeating as champs, they’ll need Sale to return to his ace form.