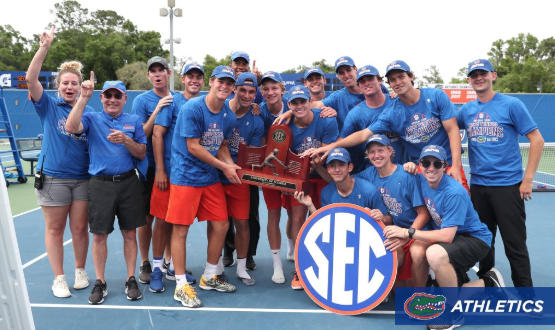 Gator Seniors Lead The Way Into The SEC Championship

Gator Men’s Tennis is on a roll going into the SEC Championship after winning the SEC regular season. The Gators finished with a 20-2 overall record and 12-0 in conference record. Two big reasons for their impressive season is seniors McClain Kessler and Alfredo Perez.

The pair are the only seniors on the team and both Kessler and Perez have had an impressive run at while at Florida.

As a junior Kessler was team captain and made it to the Elite Eight of the NCAA Individual Championships. As a senior, Kessler currently has a six game winning streak in the singles division this year.

In his junior year Perez finished the year number 2 over all with a 20-9 record in doubles matches. This year Perez has only lost one singles match back on 2/2/19. He’s also been solid in the doubles matches with partners Johannes Ingildsen and Oliver Crawford.

Gators Head Coach, Bryan Shelton, said that he trust his two seniors to get the job done in the SEC Championship.

The Gators have clearly been having a dominate year so far winning the SEC regular season. Coach Shelton said that before the season he knew the team would be a good group due the depth on the team.

The Gators are currently hosting the SEC Championship in Gainesville, FL. Look for Kessler and Perez to be stand-outs in the tournament. Florida faces Alabama Friday (4/19) at 12pm.