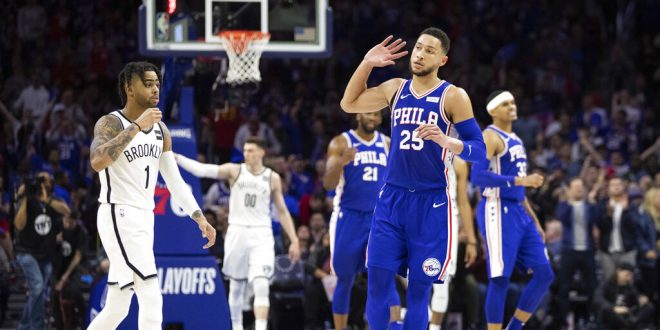 Philadelphia 76ers' Ben Simmons, right, of Australia, cups his hand to his ear after getting the ball from Brooklyn Nets' D'Angelo Russell, left, during the second half in Game 2 of a first-round NBA basketball playoff series, Monday, April 15, 2019, in Philadelphia. (AP Photo/Chris Szagola)

The Philadelphia 76ers turned their playoff matchup upside down in their high-scoring 131-115 win over the Brooklyn Nets Thursday night. Above all, Ben Simmons finished with a postseason-career-high in scoring with 31 points.

The Brooklyn Nets got off to a dreamy start denying the Sixers in game 1 at Philadelphia.

As expected, the Sixers had no sympathy during Monday’s 145-123 smashing revenge getting themselves back into the series.

Simmons shun by producing a triple-double while Big man Joel Embiid supplied 23 points and 10 rebounds. Jimmy Butler had a great passing game assisting in 7 different instances. Like the Nets in game 1, Philly had a dominant team performance with 6 team members scoring for over 15 points.

Nets Struggle To Keep Up Again

Both, Philadelphia and the Nets’ performance Friday night was no different from game 2.

The Aussie Is In The House

Simmons followed up a game 2 triple-double by going 11-for-13 scoring 31 points on Thursday. Furthermore, the 76ers coach Brett Brown said the Australian international played one of his “most dominant games” of his young NBA career.

Simmons’ 31 points, 9 assists, 4 rebounds, 3 blocks and 2 steals gave Philly a 2-1 lead over Brooklyn in its first round series.

No Embiid, No Problem

The Sixers didn’t hesitate to go out and out-score the Nets in Brooklyn despite Embiid’s absence due to a sore left knee. Simmons says the team is strong enough to rise above despite Embiid’s injury.

Simmons was the star of the game. But don’t let his numbers keep you from looking at JJ Redick and Tobias Harris’ performance at the Barclays Center.

The Nets failed to contain Redick allowing him to score 26 points. Consequently, Harris was unstoppable scoring 29 points hitting 6-for-6 from deep and a game-high 16 rebounds. Butler complimented the shooters with 7 assists once again and scored 16.

The Net’s Head Coach Kenny Atkinson will stress defensive importance to his players. Containing Simmons, Redick and Harris will be key for Saturday’s game. A home win will be instrumental for a possible upset in this series.

Kenny Atkinson speaks with the media after a tough Game 3 loss for the @BrooklynNets. #NBAPlayoffs pic.twitter.com/5msUhkNiox

The Sixers lead the series 2-1 ahead of game 4 in Brooklyn this Saturday at 3 p.m.

Figuring out a plan to make it big in the soccer scene in the U.S. or anywhere else in the world. For now, I'm having a blast writing for ESPN Gainesville and learning a lot from managers and students around the workplace. I'm covering the TV beat for Gators Soccer. What a team! Follow me on twitter: @J_AguerrevereUF
@@J_AguerrevereUF
Previous Gator Seniors Lead The Way Into The SEC Championship
Next Tampa Bay Rays Look to Sweep the Boston Red Sox This Weekend