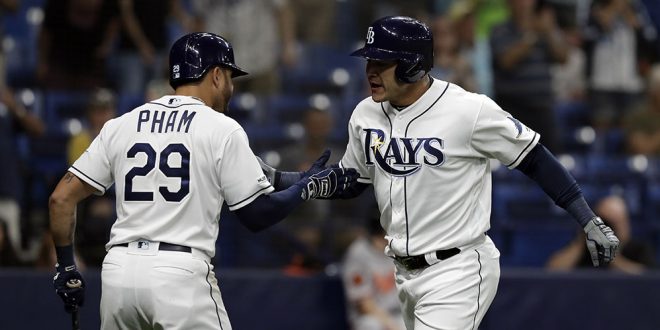 The Tampa Bay Rays currently have the best record in the MLB at 14-5 and sitting at the top of the American League.

Looking Back On Thursday

The Rays came close to sweeping the Baltimore Orioles on Thursday night. The Rays were down 5-4 in the ninth inning, but a home run from Avisaíl García tied the game.

However, in the eleventh inning, the Orioles scored and the Rays struck out. Baltimore won, 6-5.

The Rays never give up on anything, García said.

Upcoming Series Against the Red Sox

Tampa Bay leads with a 2.50 ERA and offense ranks third versus Boston’s 6.01 ERA and their 24th offense ranking. They also won all their series this season, but only sweeping the Chicago White Sox at the beginning of the month.

To fix the pitching problem, the Rays will be going with an opener again. Wood will make the start, giving the team starters an extra day of rest. Charlie Morton will follow up on Saturday and Tyler Glasnow on Sunday.

The dream conclusion to the series would be a sweep, but the Red Sox are hungry for some wins to turn their season around. The Rays can bury them easily this weekend or put up a good fight to keep their strong record.

When to Tune In

I am a fifth-year journalism major, specializing in sports and media. My favorite sport to watch and cover are college and NFL football. When I'm not doing that, I enjoy hanging out with my cat, going to concerts and traveling.
@sportsabrina
Previous Sixers Keep High-Scoring Run Going in Brooklyn, Lead Series 2-1
Next Arizona Cardinals In Control Of The NFL Draft