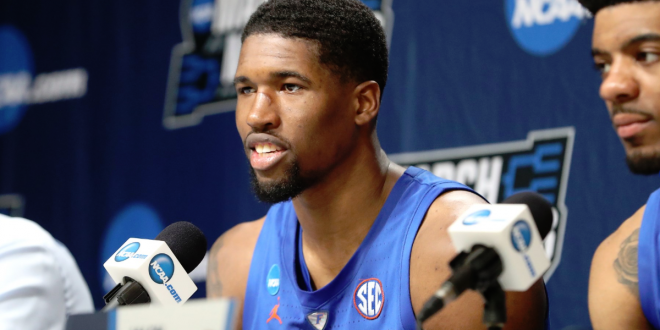 What’s Next For Kevarrius Hayes?

Think of it as the end of a chapter in life. He came in alongside Keith Stone and KeVaughn Allen in the 2015 recruiting class. Since then, Kevarrius Hayes made his mark on Florida Gator Basketball. He’s played as deep as the Elite Eight and continues to be seen as a leader on the Florida Gators staff.

For Hayes, one of the best parts of playing for the Gators was playing at home. Hayes said he loves how loud the fans are:

Going Out On Top

Hayes senior year was by far his best season and there’s no better way to go out. Hayes averaged 8.3 points per game, 6.3 rebounds, and had a field goal percentage of 67.3%. He finished 12th in the SEC in rebounds and 4th in the conference in blocks.

While Hayes has been consistently shown up for the Gators defense, Hayes has seen a boost in his offensive numbers this year. Last year he averaged almost half those number averaging 4.8 points per game.

Hayes attributes his offensive improvements to be more aggressive and more offensive minded.

“It was a conscious effort,” said Hayes, “The opportunity was there I feel like and this year I put more effort on being offensive minded”.

What Comes After Gator Basketball?

Hayes hopes to pursue a career in the NBA after college. He has workouts lined up for personal development and then some NBA caliber workouts. Though he wants to explore all of his options stateside first, Hayes is open to playing overseas. “I’ve never left the country so I think that would be something interesting to do.”

He currently has no specific post-basketball plans. However, when the time comes, ideally Hayes hopes to return to school and pursue a different major; perhaps computer science.

Kevarrius Hayes was a crucial piece to the Gators success for three seasons. Most will miss his presence on the court and his contributions to the team. Many fans will without a doubt look back at Hayes dunks.

As an assurance to Gator fans, Hayes has faith in the guys coming in to fill his shoes.

The future seems bright for Kevarrius Hayes no matter where he goes in life. Gators fans continue to hope that one day they’ll turn on an NBA and see Hayes dominating on the court and making the gator nation proud.

Harrison is a sports coordinator at ESPN 98.1 FM/850 AM WRUF. He served as a beat writer for Florida Gators football for the 2019 and 2020 seasons. He also contributes to WRUF's Gainesville Sports Center segments and makes appearances on the Clash on Harp on Sports. Harrison has been a content writer for WRUF since January 2019 as well.
@HarrisonSmaj
Previous The Greek Freak Leads the Bucks to Advance to the Second Round
Next Who Will the San Francisco 49ers Take 2nd Overall?