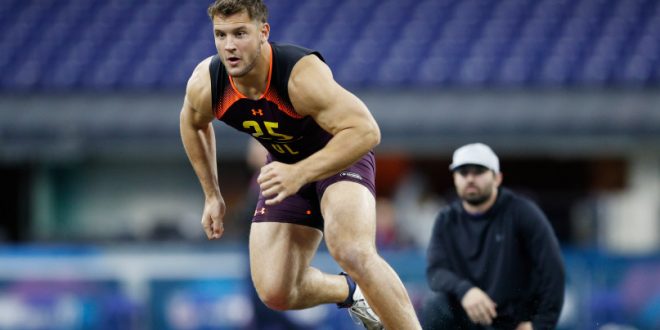 Defensive lineman Nick Bosa of Ohio State works out during day four of the NFL Combine at Lucas Oil Stadium on March 3, 2019 in Indianapolis, Indiana. (Photo by Joe Robbins/Getty Images)

Who Will the San Francisco 49ers Take 2nd Overall?

With the second overall pick of the 2019 NFL Draft, who the San Francisco 49ers select will largely depend on who goes at No. 1.

For weeks, the overall consensus has been that QB Kyler Murray, a former Oklahoma Sooner, will be snagged first overall by the Arizona Cardinals.

Now, days before the draft, rumors have spread that the Cardinals will pass on Murray and take Ohio State’s DE Nick Bosa, who football fans have seen going to the 49ers in the majority of mock drafts.

Kyler Murray to the Cardinals appeared to be a lock.

But with less than a week to go before the draft, Arizona reportedly will not take the Heisman Trophy winner with the No. 1 overall pick. https://t.co/mrtyalQnQw pic.twitter.com/v1dXjxlVQ4

Bosa to the 49ers

Bosa, who has largely been considered the cream-of-the-crop in this year’s draft, has been projected as the No. 2 overall pick.

The 49ers could really benefit from a 6-foot-4, 266 lb. DE like Bosa considering the hole in San Francisco lies at the DB position. However, Bosa obviously has other suitors than just the 49ers. Being a top-ranked draft prospect means others are knocking at the door.

Nick Bosa is the best player in the draft stop playing. He has been and still is.

That being said, the rumors circulating now are that Bosa could get stolen at No.1 to the Cardinals. If this happens and Arizona passes on Murray, the 49ers have to consider other options.

Quinnen Williams is another big name in the conversation to go at No. 2.

Williams could be a great addition as an interior lineman for the 49ers with an impressive college career at the University of Alabama.

Even with three recent first-round picks along the interior defensive line, #49ers are considering Quinnen Williams at No. 2 overall. GM John Lynch discusses him during a pre-draft media session. pic.twitter.com/i2vzKZ6U58

Though Williams would undoubtedly be a beast on the defensive line, some question where he would fit into the 49ers lineup.  DeForest Buckner currently plays in the role that Williams would look to possess.

“Whatever happens at one, we have a group of players that we have vetted thoroughly and will be prepared. I think we will get a really good, difference-making player.”

With just two days before the big day, General Manager John Lynch says that no matter who the team gets at No.2, he has confidence the organization will still select a great player.