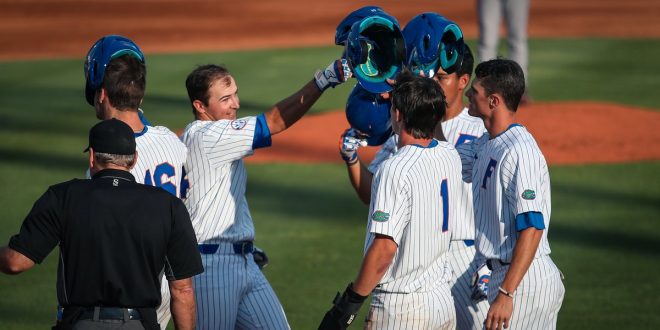 Despite a talented bull pen, the Gators have continued to struggle with consistency on the mound during the weekend series.

The key for Florida has been the success of Friday night starter Tommy Mace. In last weekend’s series against the LSU Tigers, Mace pitched a solid seven innings allowing for ten hits and four runs while striking out nine.

The Gators’ Saturday starter Jack Leftwich had a tough outing against the Tigers last weekend. After allowing six runs through one inning pitched, Leftwich was relieved by Jordan Butler.

It is unclear who will get the Sunday start for both teams but it is likely that the Tyler Dyson or Chrisitian Scott will see the mound for the Florida.

Florida’s offense had one of their most explosive offensive games in their first game against LSU, but struggled at the plate the rest of the weekend.

Brady McConnell has been the Gators most consistent performer at the plate. McConnell leads the Gators in hits (59) and home runs (9).

Additionally, Austin Langworthy has began to see more success at the plate. In three out of the last four games, Langoworthy has gone three for the at the plate, recording two home runs and eight RBI.

Single to right gives the #Gators a lead and puts runners on the corners with no outs.

Kentucky is coming off a 15-4 midweek victory over Western Kentucky. The Wildcats offense had a huge night, combining for a total 15 hits, including six home runs. Outfielder Ryan Johnson recorded three home runs and three RBI.

For the Wildcats, Ryan Shinn has been Kentucky’s powerhouse at the plate. Shinn leads the Wildcats in hits (47), runs (35), and home runs (12).

You can catch live coverage of this weekend’s match-ups on the SECNetwork+ or tune in live to 98.1 FM/850 AM WRUF.