Gator Softball back in action at Auburn

The No.7 Florida Gators return to the diamond as they travel to Auburn to take on the No. 19 Tigers over the weekend.

Tim Walton’s group gets back to play after being swept by the Alabama Crimson Tide last weekend in Gainesville. Florida will look to get back on track as that sweep snapped an eight game winning streak for the Gators.

With having a full week off, expect the Gators to fire out their top arms. This includes using All-American Kelly Barnhill early and often during the series. In fact, Barnhill is ranked third in the nation in strikeouts with 261 and is just five away from tying Stacey Nelson’s all-time UF record.

What they need to fix

As the Gators close out the regular season, some improvements need to be made against their final opponents. The main issue is offense, which has been sluggish at times throughout portions of the season.

Outside of Amanda Lorenz and Kendyl Lindaman, Florida has lacked consistent offensive production. With two weekend conference series’ left to play for the Gators, they’ll have opportunities to fix their woes before heading into the postseason. 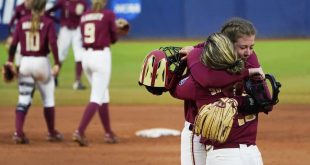