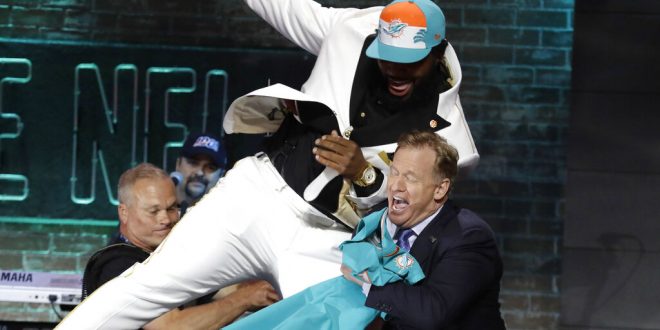 The 2019 NFL Draft is underway and is looking pretty hopeful for Florida teams after the first round. After a rough 2018 season, an exciting new start is looking to come. So far all three teams have added defensive players to their roster.

After ending the 2018 season last in the NFC South with a 5-11 record the Bucs were looking for guys to make the 2019 season a turn around.

The Buccaneers selected No.5 draft pick, Devin White, to join the team. White played college football at LSU where he won a Butkus Award for the top linebacker in college football last season.

“I want to be a great pro, it’s about me but it’s about the team as well and I know he wants everybody he coaches to be great and I’m just ready to be great. Whatever I gotta do, whatever work I gotta put in, I’m ready it’s just the next step in my journey,” White said.

The 13th overall pick went out to defensive lineman Christian Wilkins. Wilkins played at the collegiate level for Clemson. He’s an all-around defensive minded tackle who can dominate the field. He can play any position on the defensive line.

“I was just so honored and so happy that someone went and got me, it’s just a special feeling to continue. I accomplished my dream and that doesn’t mean my work is over, my work is just beginning,” Wilkins said. “You know this is life changing, this is so special to me.”

Thinking he would go higher in the draft, the Jags were thrilled to score defensive end Josh Allen as the 7th overall pick in the draft.  Throughout his time at Kentucky, Allen grew to be the best pass rusher in college football.

“My sack numbers, I could just end it right there, Allen said. “But I believe this is one of the best edge classes, best defensive classes in a very long time. We’re trying to be the best and I wish nothing but success for these guys out here.”

What do you think of the #jaguars new draft pick Josh Allen?

The second round begins tonight at 7 PM EST on ABC, ESPN, and NFL Network.