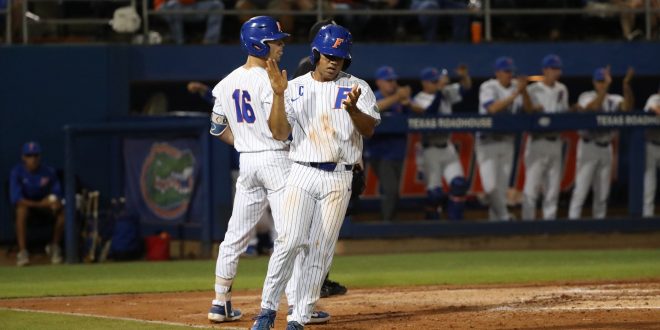 In a series that could help determine the post season for the Florida baseball team, the Gators come up with a 10-8 win in Game 1 against the Kentucky Wildcats in Gainesville.  Florida improves to 8-11 in the SEC while the Wildcats fall to 4-15 in league play.

The Gators got off to a quick offensive start when lead off hitter Brady McConnell hit his 10th homer to give Florida the early 1-0 lead but it could have been more.  A series of hits from Nelson Maldonado, Kendrick Calilao, and Cory Acton loaded the bases. However, Kentucky’s Jimmy Ramsey managed to get out of the jam to end the inning.

In the bottom of the second, Maldonado’s three-run home run scored Jud Fabian and Austin Langworthy, putting the Gators up 4-0.

A three-run home run from Nelson Maldonado puts the Gators up by four.

Maldonado commented on his homer.

On the mound, Tommy Mace got the start for Florida and pitched well early, pitching back-to-back three up, three down innings.

Florida’s defense had an impressive third inning, featuring a diving catch from Fabian. Additionally, Mace picked off Kentucky’s Zeke Lewis at first base to end the inning.

After a slow start at the plate, Kentucky picked up the pace in the top of the fourth.

After loading the bases, Austin Schultz recorded a ground out RBI that scored Ryan Johnson for the Wildcat’s first run of the night. A two-run home run from Coltyn Kessler cut the Gator lead to 4-3.  Kessler had a nice night offensively with three hits for the Wildcats.

In the top of the fifth, freshman Christian Scott took for the mound for the Gators after Mace took a line drive off of his face; there was no blood and he left the field under his own power but he was literally knocked out of the game.  Kentucky tied things up in the top of fifth after a single from Johnson advanced Marshall Gei in for the run.

In the bottom of the fifth however, Wil Dalton reclaimed the lead for the Gators with a two-run homer. Jacob Young furthered the lead to 7-4 with an RBI double.

Kentucky continued their offensive momentum into the top of the sixth. After loading the bases with three straight singles, Jalen Shelby hit a sacrifice fly that plated a run.  With the bases loaded, Scott walked Lewis to force in a run and the lead was cut to 7-6.

In the bottom of the sixth, Maldonado put the Gators up 9-6 with a two RBI double. Dalton tacked on another run with a sacrifice fly, scoring Maldonado.

A two-run RBI double from Maldonado furthers Florida’s lead. Maldonado has five RBI on the night.

Maldonado finished the night three for five at the plate, including three hits, five RBI, and a homer.

Kentucky’s offense continued to battle back in the top of the seventh as they scored two runs to cut Florida’s lead to 10-8.  Nolan Crisp game into the game to pitch two scoreless innings for the Gators to earn his eighth save of the year. 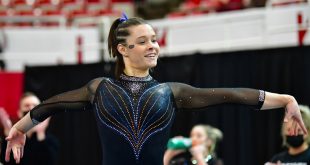