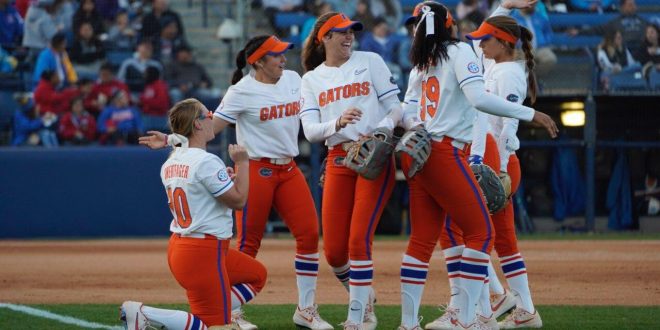 The No. 7 Florida Gators defeated conference opponent and No. 19 Auburn Tigers 6-1 to win the weekend series.

All-American Kelly Barnhill was spectacular again Sunday afternoon as she struck out 10 Tigers en route to a complete game. She pitched a total of 17.2 innings over the weekend while recording 24 strikeouts in the span.

Barnhill was just named as a finalist for the 2019 USA Softball Collegiate Player of the Year. She’s heating up at just the right time as the Gators gear up for postseason play.

Getting it done early

Florida put up all its runs in the game within the first three innings. The offense got it done early and the pitching held down the rest. Jordan Roberts was the hero on the day taking one deep to right center with the bases loaded.

The Gators added two insurance runs in the top of the third as Hannah Sipos and Cheyenne Lindsey drove in runs. Florida outscored Auburn 14-2 over the weekend.

The Gators return back to Gainesville for a series against Mississippi State next weekend. The Bulldogs just swept fellow SEC opponent Missouri this weekend.

This is the last series of the regular season for the Gators as they get set for postseason play. The SEC tournament begins May 8 in College Station, Texas.