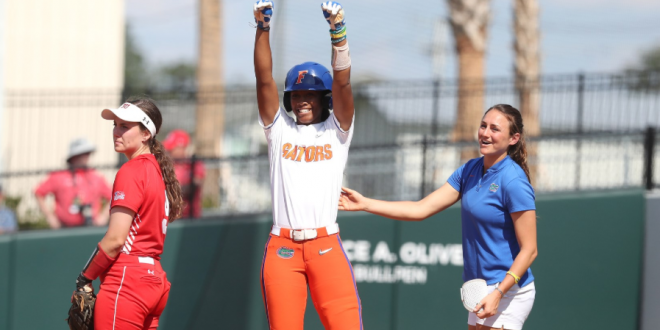 The Florida Gator softball team started its sixth straight NCAA Regional with a win on Friday afternoon.  The number five national seeded Gators shut out the Boston University Terriers 3-0 to advance to the winner’s bracket of the Gainesville Regional.

One down! @GatorsSB opens NCAA Regional play with a win over Boston U! #GoGators pic.twitter.com/AXZBR0wBn0

This game followed the same pattern as Florida’s last four; take the lead on one good inning and ride pitcher Kelly Barnhill. That one good inning came in the fifth for coach Tim Walton’s team. In fact, Florida was being no-hit until that juncture in the game.

Just like against Alabama in the SEC Tournament, a pinch hit by Cheyenne Lindsey sparked the offense. She got it started with her one-out single.

“It is huge any time someone comes off the bench and gets a hit for you because that’s a huge role to play on a team,” Gator second baseman Hannah Adams said. “That gives everyone in the lineup a lot of confidence and we were just all really proud that Cheyenne was able to do that for us.”

Alex Voss moved her to second on a bunt and BU pitcher Ali DuBois pitched around Lorenz to get to Kendyl Lindaman. She then smoked a double in the left center field gap to score Lindsey and move Lorenz to second.

Lindaman on figuring out DuBois:

Adams came up next and roped a 1-2 pitch into the right field corner for a two-RBI single. She says a big thing for her at the plate has been an increased confidence.

Walton said calling the bunt was unconventional for him but he was playing the chess match to see what Boston would do with Lorenz and Lindaman.

Barnhill Goes the Distance, But Could’ve Been Better

Kelly Barnhill’s performance was her third shutout and fourth complete game in as many starts. She struck out five batters to no walks and surrendered four hits.

She said postgame that her riseball didn’t have as much movement as it could have. It forced her to rely more on her two-seam and screwball down in the zone to get outs.

Sophia Reynoso made a highlight play to help get Barnhill out of a two on and two out situation in the top of the sixth. She careened into the camera well to grab a pop up in foul territory.

Walton on being spoiled by Barnhill:

Boston’s Ali DuBois matched her nearly the whole way through. The two-time Patriot League Pitcher of the Year utilized her various pitch speeds to keep Florida off-balance. She had an added obstacle being called for an illegal pitch two different times.

She said she had to forget about her back foot and just focus on pitching. Nonetheless, she finished giving up three earned runs on four hits while walking three and fanning four over five innings pitched.

DuBois on the illegal pitch calls:

BU coach Ashley Waters called a meeting with her promptly after the second instance. Waters said it was tough seeing her pitcher get called for an illegal pitch with the conversation that exists surrounding Kelly Barnhill nationally about her mechanics.

Waters’s message to DuBois in her circle meeting:

She said she was proud of the way her team competed and how DuBois was able to keep an SEC team off-balance for two times through the lineup before it made an adjustment.

Waters on the team’s underdog mindset:

Florida takes on Boise State at 2 p.m. on Saturday in Game 3 while Boston and Stanford will play an elimination game.