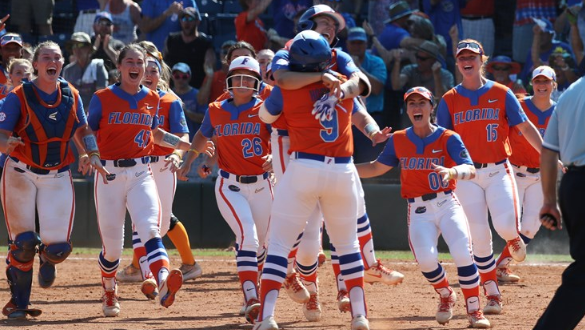 It was smiles all around in the postgame presser for Amanda Lorenz, Jaimie Hoover, Kelly Barnhill and Hannah Adams. Why? Because Florida Gators Softball is Oklahoma City-bound for the third-straight year.

After suffering a defeat on a walk-off the night prior, the Florida Gators defeated the Tennessee Lady Vols 2-1 with a walk-off of their own on the bat of Jaimie Hoover in the eighth inning.

From Hat Trick to Walk-Off Winner

On a day where the temperature reached almost 100, Jaimie Hoover stepped into the batter’s box ice cold. She was 0-for-3 with three strikeouts on the day.

Lorenz on what was said in B8:

Tim Walton could tell she was guessing a little bit. He bypassed everyone after Lorenz’s double and went straight to Hoover.

“Jaimie, you got a chance here. It’s gonna be you,” he told her.

She fouled off the first pitch from Rogers. The next one was a changeup over the plate that cemented her name in history and sent Gators Softball to OKC for the 10th time.

“It’s not easy to be in that spot and have a clear head and find a way to get that done with the season on the line. The game doesn’t know she is 0-for-3, the game has no way of knowing that, so that’s just the coolest thing about postseason. In our game, no one knows or cares – all that matters in that moment. No one is going to remember she was 0-for-3 before that, all they are going to remember is the walk-off hit – that’s pretty sick.

WALK OFF. Jaimie Hoover goes from three Ks in a game to the game-winning hit. Florida is headed to the Women's College World Series. Florida 2, Tennessee 1 pic.twitter.com/UxgLYsIO76

“I wasn’t looking for a change-up, I was just looking for something that I could drive,” Hoover said. “That feeling is unbelievable, I am so happy I could do that for my team.”

Walton already knew that Barnhill would start on Sunday the moment he left the postgame presser on Saturday night.

Barnhill on if she knew she was starting:

The Gator ace entered the game coming off a 280-pitch workload from the last two days. She had 493 pitches dating back to regional play. Walton walked back his comment on Saturday to say she was more spent than gassed after game two.

After the loss on Saturday, she hopped in the cold tank, had her shoulder cupped and went home to use the NormaTec system on her arms for 35 minutes and on her legs for 45.

“Throwing the whole kitchen sink at it,” she described the process.

Although, pitch count doesn’t matter too much to her. It’s more about how she feels physically and the adrenaline helped her push through on Sunday.

Barnhill didn’t seem too bothered as she got through six innings on just 86 pitches with five strikeouts.

She finally cracked in the seventh inning when Haley Bearden hammered the first pitch of the inning over the right-center field wall. She took a screwball over the plate for a ride.

She responded to that home run with six straight outs. Barnhill finished with one earned run, seven strikeouts to one walk and four hits over eight innings pitched.

“In my mind, we’re not going to finish the game with anybody else but Kelly Barnhill,” Walton said.

But for now, the Florida Gators are heading to OKC again and ended the last UF sporting event on campus of the season with a bang.