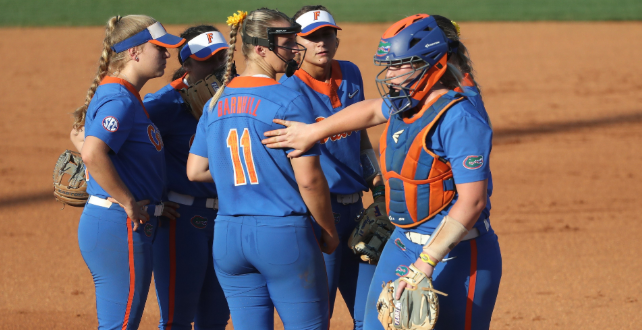 It’ll be a win or go home situation for the Florida Gators on Sunday afternoon. Florida dropped a 3-2 thriller wackier than a Donald Duck cartoon in extra innings to the Tennessee Lady Vols on Saturday.

A raucous and record crowd couldn’t help as Florida’s back is against the wall now. But it hasn’t been the Gators’ first tough spot this season.

Sophia Reynoso on the team’s mentality:

Tennessee struck in the bottom of the first inning. Aubrey Leach singled, moved to second on a delayed steal and swiped third on a wild pitch.

The Lady Vols had a quartet of delayed steal attempts on the night. All but one were successful.

Karen Weekly on the delayed steals:

Chelsea Seggern singled to score Leach. Tennessee held the lead until Florida tied it up in the fourth as a Jaimie Hoover single scored Amanda Beane from second.

Tennessee took lead back thanks to an RBI single from Madison Pacini. Florida came right back in the top of the fifth to bring it to 2-2 on a Hannah Adams hit.

Adams was Florida’s most productive hitter on the night. She finished 3-for-5 with the RBI. She’s hitting .382 in her last 11 games. She goes back to her whole mindset of what happens before doesn’t matter now.

For all the clutch hits on Saturday night, Florida and Tennessee combined to leave 19 runners on base. But, Walton was quick to point out the game’s length factored into the number.

Walton on leaving runners on:

Fast forward to the bottom of the eighth where Tennessee tried another delayed steal. This time the Vols sent Cailin Hannon home from third but a heads-up play by the Gator infield cut her down at the plate.

Tennessee kept Florida off the board in the top of the ninth, stranding Lorenz and Lindaman who worked two-out walks.

Kelly Barnhill came out for the ninth, forced a fly out and then walked two straight batters. Then Walton gave her the hook. He knew she was gassed.

“When you’re calling rise balls and they’re bouncing, that’s when you know,” he said.

Lefty Katie Chronister lasted just one batter after a single loaded the bases. It was Natalie Lugo’s turn to get Florida out of the jam. Haley Bearden worked a walk on a full count to force game three.

Arnold said she felt the same every single inning. On a hype scale of 1 to 10, Arnold put herself at the 1 or 2 mark for her outing.

“In this past when we’ve been in Super Regionals my adrenaline has kind of taken over and I didn’t feel that this game,” she said. “I just felt very calm and collected.”

The game set a new attendance record at Katie Seashole Pressly Stadium with 3,140. Leach said the Lady Vols have brought a few record crowds to games before.

“It’s just the competion,” she said.

Caylan Arnold on the crowd:

“I heard a couple of people talking in the stands, saying ‘Oh, I need some water, my voice is getting scratchy,’ and I appreciate that people are screaming their guts out for us,” Walton said.

“At no moment in the game did anyone in the stands think we were going to lose and I felt that. It’s a cool memory, we lost, but it was cool to see that everyone had that excitement and passion to try and help us.”

With the season on the line Sunday, it wouldn’t be a surprise to see a rowdy crowd then despite the 100-degree forecast.

Walton lays out the stakes:

Florida and Tennessee square off in the rubber match Sunday at 2 p.m.