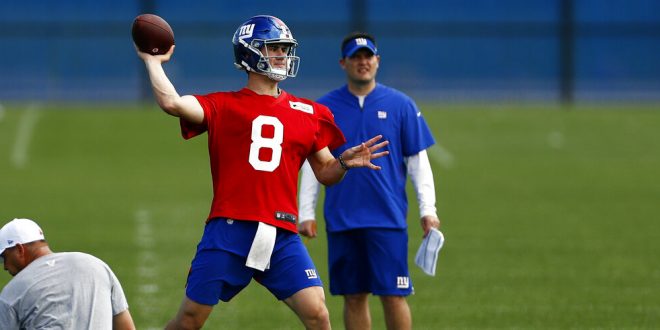 Daniel Jones is Settling in with the New York Giants

Many were surprised with the New York Giants’ No. 6 overall pick Daniel Jones. Even with his comparisons to Eli Manning, the media and fans were not expecting the Giants to draft a quarterback with their first pick in the draft.

The Giants overlooked quarterbacks Dwane Haskins and Drew Lock and took Jones as the No. 6 overall pick. However, Jones seems to be fitting in just fine with the New York Giants.

Jones is preparing to take over the Giants offense after Eli Manning. And what better way to learn than watching Manning himself. Jones is keeping his eyes glued to Manning during practices hoping to absorb all he can from the veteran, entering his 16th season.

Jones has been described as very similar to Manning, so its no surprise that the Giants want to try and duplicate the success that they have had with Manning. Not only are they similar in physicality. Pat Shurmur has said that their personalities are also similar. They are both very calm in their approach but definitely have some fire inside.

Jones is receiving reps with the second team offense. There is still a long way to go for Jones, but he is continuing to work in practice and learn from Manning each and every day.

After redshirting his first year at Duke, and forgoing his final year of eligibility, the redshirt junior decided he was ready to tackle the NFL. During his three years at Duke, Jones racked up over 8,000 passings yards and over 1,300 rushing yards. Jones was consistent at Duke, completing almost 60% of his passes each year, but also threw for nearly 10 interceptions each season.

Standing at 6-foot-5, 221 pounds, Jones is the ideal candidate for an NFL quarterback. However, during his time at Duke, Jones didn’t prove to bring anything special to the table. That was until he got his chance at the NFL combine. At the combine, Jones truly got to show what he was capable of and began running up the draft boards.

Jones was developed by David Cutcliffe who also helped develop both Manning brothers at Tennessee and Ole Miss. He has been said to have a good mind for the game and was more refined than the other quarterbacks in this class. He is great a pre-snap reads and is pretty accurate with shorter routes. The young quarterback is can also be very mobile.

After floating balls during the Senior Bowl, Jone’s arm strength is a questionable subject. His decision making is also known to get him into trouble. He averaged almost 10 interceptions each season during his time at Duke.

While his accuracy is good on shorter passes, it does suffer on longer passes, especially when he is forced out of the pocket.