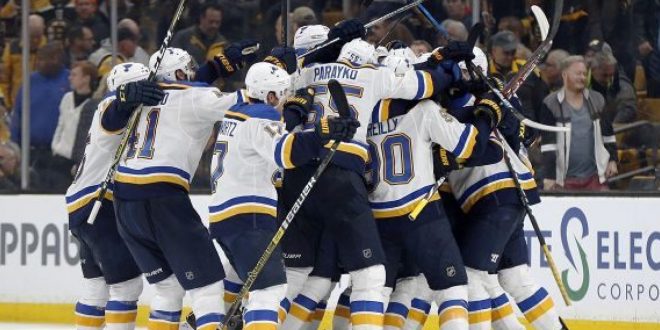 A Carl Gunnarsson goal in OT helped propel the Blues to a win and to a series tied at 1 apiece. The Blues were resilient in Game 2 as they trailed twice during the game and still found ways to come back.

Carl Gunnarsson’s overtime goal was the first playoff goal in his career. The late-game heroics helped Saint Louis secure their first ever win in a Stanley Cup final.

Bruins Speak Out About Game 2

After the game, a couple of players, as well as Head Coach Bruce Cassidy, spoke out about the performance of both teams in game 2.

Bruins Left Wing, Brad Marchand gave a blunt response to reporters after the game. He mentioned how he and the rest of the Bruins squad are over Game 2 and ready to get back on track in Saint Louis.

Head Coach Bruce Cassidy provided the press with his statements regarding how the Bruins let Saint Louis get back into the game. He also mentioned how Saint Louis played better in Game 1.

Specifically, he gave them credit for some schematic changes they made in Game 2 that gave the Bruins some trouble.

Bruins Ready to Win on the Road

Cassidy also made sure to state that it won’t be easy and he knows Saint Louis will feed off of their home crowd throughout the next two games.

For a fanbase who has never won a Stanley Cup Final, it should be assumed that Blues fans will be in full force Saturday.

With Boston being such a dominant team historically in the playoffs, the Blues will need to use any advantage they can get. Boston will look to their veteran star Brad Marchand to help themselves steal Game 3 away from home.

Marchand is currently leading the team in the postseason with 19 points. Statistically, when Marchand plays well offensively, the Bruins give themselves a much better chance of winning.

Previous Keeping up with the Rays and the Marlins
Next NBA Finals: Raptors vs. Warriors Game 1