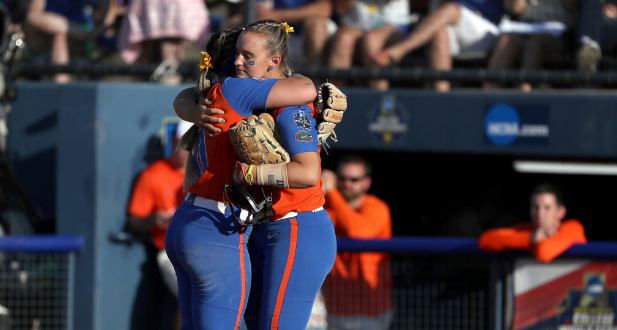 For the first time, Florida softball went 0-2 and barbecue out in Oklahoma City. The Alabama Crimson Tide jumped all over Florida early to send the Gators home by a run-rule score of 15-3.

Not only is it the first time Florida went winless in OKC but the 2019 Gators are the first team since 2012 to post fewer than 50 wins in a season.

This is what happened with the nine batters she faced: double, intentional walk, three-run homer, walk, flyout, HBP, flyout, three-run homer. She didn’t escape the first inning or record a strikeout.

The weather has passed, but that didn't stop Kaylee Tow from blasting this THUNDEROUS home run!#WCWS | @AlabamaSB pic.twitter.com/MkMdbkdeZD

Elizabeth Hightower relieved her but didn’t fare any better. Alabama scored four runs through her two innings on five hits against Hightower.

Natalie Lugo had the best outing among the staff. Florida allowed two runs on one hit with her in. Although, Walton pulled Lugo to give Barnhill one last pitch before she said goodbye to the college softball world.

Katie Chronister got the final out but was touched up by the Crimson Tide for three runs. The Gators allowed 15 runs (nine earned) on 12 hits, two errors and five walks.

One Last Moment in the Sun

Walton said around 8-0 or 10-0 he decided to trot Barnhill back out. But, he won’t remember how it started but rather how it ended for her: a standing ovation from both the Florida and Alabama faithful.

“I tip my cap to Alabama for being a really good team this year, but also for the level of respect that they showed another great player on the other side of the field,” Walton said. “I thought that was…probably the definition of sport that doesn’t get recognized very often. That was really cool.”

Walton on the decision to put Barnhill back in:

Barnhill said Walton told her it was to honor her for all she did at Florida wearing the orange and blue. She even credited the crowd for its cheers as she walked off.

“It was a really special moment just being able to go out there again, have one more pitch with my teammates by my back,” she said.

First baseman Amanda Lorenz said Barnhill will remember that moment for the rest of her life.

Lorenz on Barnhill leaving for the last time:

The End of Two Great Careers

The loss concluded the collegiate careers of both Barnhill and Lorenz. They headlined a senior class with several notable achievements:

Lorenz finishes as the career leader in batting average (.406) and on-base percentage (.550). She is the only Gator player besides Hannah Rogers to earn four All-America honors.

“Being a Gator was the best thing to ever happen to me,” Lorenz said.