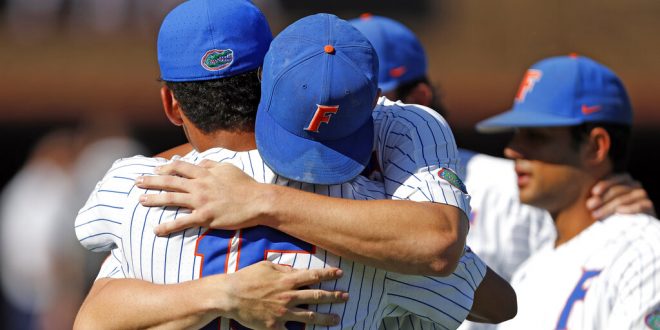 The Gator’s up and down season came to a close in the Lubbock Regional over the weekend. Finishing the season at 34-26 overall, their final game against Dallas Baptist came down to the final out with the tying run on third.

Florida would not get the chance to tie the game up, however, after a ground ball to second from freshman Jacob Young for the final out. The Gators scored 16 runs in two games against Dallas Baptist but lost both after giving up 20 runs over the two games.

Through all the ups and downs of this season, thank you #Gators for sticking with us! #GatorsAlways pic.twitter.com/3NL6TWcpNi

Before the Gators even had the opportunity to tie it up in the bottom of the ninth, they have to come back from a seven-run deficit. DBU scored all of their nine runs for the game during the fourth inning.

This was the first time the Gators have allowed nine or more runs in an inning under O’Sullivan, who took over the program in 2008. Freshman right-handed pitcher Nick Pogue started the game off strong during his first NCAA Tournament start. Pogue made it through three scoreless innings against the Patriots before the dreaded fourth inning.

The #Gators season came to a close on Sunday, finishing an up-and-down season

Pogue gave up two home runs, two singles, a double and a walk during the first part of the fourth, making the score 4-2. The Gators then brought in Freshman right-hander Nolan Crisp. Crisp had been a solid closer for the Gators most of the season. This was not his day however as he came in and gave up three runs making the score 9-2.

Florida was able to earn some of their runs back during the fifth and after a two-run homer from Wil Dalton, the Gators were back within three. Following two straight walks to begin the seventh, Dalton was able to score again following an infield single from Jordan Butler. The Gators were able to score one more in the bottom of the ninth, but it would not be enough to win. The game ended 9-8.

During the Gators game against Army on Saturday, Sophomore right-hander Jack Leftwich retired the first 16 batters he faced. He allowed just one run on one hit during his seven innings of work. Leftwich struck out seven with only one walk before handing over the ball to reliever Kirby McMullen. He finished with 111 pitches, 79 of them being strikes. Leftwich gave the Gators the start they needed after the Friday night starter Tommy Mace was only able to record four outs.

Junior right-hander Tyler Dyson also made his first appearance in the second game against DBU. Dyson who had not seen action since April 20 at LSU came out for the top of the ninth blazing. He pitched a scoreless inning and struck out two of the batters he faced. Dyson started the season as the Gator’s Friday night starter but had trouble getting in a groove.

Coming into the 2019 season, Maldonado saw action in 70 games, tied for the 10th-most in school history in a single season, with 69 starts. He was named to the 2017 and  2018 SEC Academic Honor Roll as well as the 2016 NCAA Gainesville Regional All-Tournament Team.