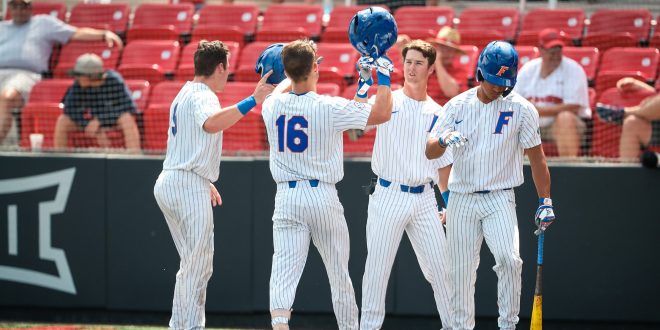 The 2019 MLB draft started on Monday, June 3rd and it came to a close on Wednesday, June 5th. It consisted of 40 rounds in which 1,217 players in total from both college and high school got selected by major league teams.

Gators selected in the Draft

The Gators got an early representation when sophomore shortstop Brady McConnell got selected on the first day. He was the third pick in the second round, 44th overall.

With the 44th pick of the 2019 #MLBDraft, the @Royals select @GatorsBB SS Brady McConnell: https://t.co/OHooNe2EPu pic.twitter.com/2YZgcKYRKL

Even though McConnell is only a second year, he became eligible for the draft when he turned 21 last May. He will be joining former Florida teammates Brady Singer and Jackson Kowar.

McConnell was looking like a first-round pick during his junior year of high school but then showed inconsistency in his senior year.

This inconsistency caused him to move down the draft charts and eventually get picked on round 33 of the 2017 MLB draft. He decided to honor his commitment to the University of Florida and play with the Gators.

McConnell missed most of his freshman season due to an injury. He quickly moved up in his second year where he eventually became part of the starting lineup for the Gators.

McConnell ended his 2019 season .332 batting average, .576 slugging average, and a .385 on-base percentage. He also finished the season with 15 home runs, the most ever by a Gator shortstop.

Brady McConnell now has 15 home runs on the season, the most ever by a #Gators shortstop.

Dyson also made an appearance for the Gators when they traveled to Omaha for the College World Series. He was the starting pitcher for the first championship game against LSU in which he pitched 6 innings.

He began his 2019 season with the Gators as a Friday night starting pitcher but wasn’t able to keep that spot for very long. Dyson was able to hit 100mph on the radar gun during his college career but showed incontinency whenever he took up the mound. This inconsistency made Florida head coach, Kevin O’Sullivan, move him to the bullpen on April.

The junior pitcher ended his career with a 4.95 ERA, 43.2 innings pitched, and an opponents’ batting average of .243

The @RedSox take @Wil_Dalton8 with the last pick in the 8th round! #MLBDraft #GatorMade pic.twitter.com/mSYFRmOuim

Wil Dalton joined the Gators in his sophomore year after transferring from Columbia State Community College. He was previously selected on the 29th round of the 2016 draft after graduating high school. He spent his freshman fall semester at San Jacinto College before transferring to Columbia over the spring and eventually transferred to Florida.

Dalton earned his starting position with the Gators early in the 2018 season playing as a right fielder. He was able to stand out from the very beginning with his constant ability to hit the ball and move around the bases. Dalton ended his 2018 season with 60 runs, 19 home runs and 60 RBIs.

Dalton’s 2019 season with the Gators was expected to be challenging. With seven previous teammates getting drafted, Dalton was one of the few veterans left in the starting lineup. He was expected to step up for his team and hopefully perform as good as last season.

His numbers dropped in his 2019 season with 44 runs, 8 home runs, and 34 RBIs. The lack of experienced hitters surrounding him definitely showed but through it all, he was still able to keep a positive attitude. He also ended his season with a batting average of .262 (same as last season), a .381 on-base percentage, and a .466 slugging average.

Congrats to senior captain @NellyNel0221!! A 21st round pick of the @Cubs in the #MLBDraft.

What is your favorite Nelly moment from his #Gators career? pic.twitter.com/rJveBm0XFI

Nelson Maldonado has been playing with the Gators since his freshman year in 2016. He made an appearance in 64 games, starting in 59 of those. He had 6 home runs which ranked 4th on his team and first among the outfielders. Maldonado was the only one on his team to have a multi-HR season against an SEC team after he hit two homers against Kentucky.

In his 2017 season, he was the most consistent hitter of the team with a .299 average and also led the team with a .499 on-base percentage. He was also ranked third for his batting average in the SEC in league games.

As a junior, he played in 70 games, starting in 69 of them. He played 6 games as a right fielder but then played the rest as a designated hitter. Maldonado batted .273 and set career bests with 10 doubles, nine home runs, and 44 RBIs.

For his fourth and last year with the Gators, Maldonado got selected to be co-captain along with senior infielder, Blake Reese. As a veteran player in the team along with the title of team captain, Maldonado was expected to share his expertise with the new freshmen. He was expected to continue the excellent performance he has shown through his previous 3 years with the team.

He finished his last season with a .343 batting average and a .408 on-base percentage, both better than the one set on his previous year. Maldonado also tied his run scored with the ones scored last year, scoring 44. His RBIs only decreased by one, moving from 44 on his 2018 season to 43 on this season.

Feleipe Franks is currently the starting quarterback for the Florida Gators. He has shown a lot of growth and improvement in the 2018-2019 football season compared to his performance from the previous season.

Franks used to be an outstanding baseball player when he was in high school, playing as a pitcher. He has not played baseball since his junior year when he decided to focus completely on football.

Franks said he was honored that Boston picked him but that he is fully committed on becoming the very best at what he is doing right now.

Excited for my next step and to be a part of @GatorsBB !! Road to Omaha starts now #GatorNation pic.twitter.com/EPTkY4zvBO

Both Barco and Nesbitt were drafted straight out of high school but decided they want to honor their commitment to the University of Florida.

Camila is a senior at the University of Florida, who served as a beat writer for the women's basketball team from 2019 until the 2021 season. She was also a beat writer for the Gators football team during the 2020 season. Camila is also WUFT's news director as well as a sports reporter/anchor.
@CamilaMaffuz
Previous NCAA Pushes Back 3-point Line for Its 2019/20 Basketball Season
Next Odell Beckham Reports to Camp and Finally Shows Browns’ Fans Why They Should Be Excited