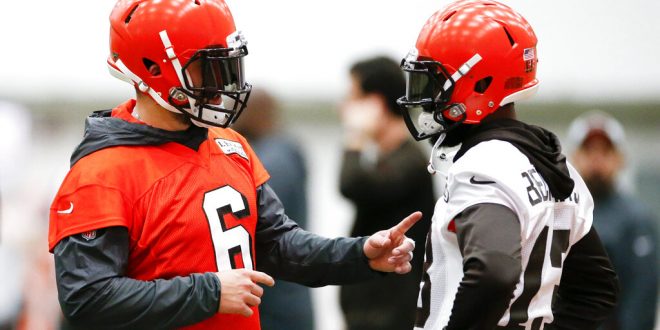 On Tuesday, Odell Beckham Jr. finally reported to the Browns practice facility for mandatory mini-camp and quickly reminded his teammates, coaches and fans why they should be excited.

The Browns made the headline of the offseason after acquiring star wide receiver, Odell Beckham, from the New York Giants. The trade caused expectations for this season to reach an all-time high. The only problem is that Beckham has been away from the team for much of the off-season.

Giants fans are all too familiar with Beckham creating headlines during this time of the year. He has always preferred to train in L.A. where he feels he benefits the most when getting his body ready for the upcoming season.

Joining the Browns has not changed his approach. Beckham kept true to his promise on being with the team when mini-camp started and quickly caught everyone’s attention.

Clips of Baker Mayfield connecting with Beckham is certainly going to keep fans entertained this offseason, but Beckham and head Coach, Freddie Kitchens know there is a lot of work to do.

Learning the Playbook and Building Chemistry

The first step towards building his legacy in Cleveland is learning the playbook, a task that he is not too concerned about. Beckham showed how dominant he can be the moment he stepped on the field.

His rare athleticism shows with every practice rep, but it is his understanding of the game that allows him to be one of the leagues most savvy route runners. Picking up a new playbook should not be a challenge for someone of his caliber. Getting on the same page as second-year quarterback, Baker Mayfield, is the challenge.

September is fast approaching and every day the two spend together is critical for this offense to reach its full potential. Whether the two practice in Cleveland or L.A., Beckham is learning what kind of quarterback Mayfield is. Confidence exudes from Mayfield and the two players are not shy about their goals and desire to hoist the Lombardi.

Freddie Kitchens Knows What He Got With Beckham

Setting the bar high is understandable when the roster is young and full of talent. Freddy Kitchens’ job is to control all of the personalities that come with that talent. Beckham may bring the most talent to the team, but he brings plenty of personality and media attention with it.

Beckham has one of the most polarizing personas. He is constantly portrayed as a distraction from people who are not close to him.

Kitchens has no desire to pay attention to that and believes he knows exactly who he got. Any of Beckham’s current and former teammates will certainly attest that he is just passionate and wants to win more than anyone.

Putting It All Together

The expectation to win makes sense when looking at the Browns’ roster. Dynamic athletes are everywhere on this roster, but it is the offensive skill positions that has everyone excited.

Players like Nick Chubb, Kareem Hunt (first eight games), David Njoku and Jarvis Landy are capable of scoring at any moment and will now need to make room for Beckham.

Finding a place for these players to be on the field and maximize their skills will haunt defensive coordinators.

Flexibility within formations is where Beckham can offer the most. Playing inside or outside, he can take a short pass the distance while also forcing the defense to play off of him because of his deep threat presence. Defenses have always had to key in on Beckham, but with the talent now around him, that task is even more daunting.

“Ready to get back to the playoffs”

Defensive coordinators need to be creative when coming up a way to slow Beckham down. He is used to and expects teams to gravitate coverage towards him. It may affect his stats, but his goals are larger than yards and touchdowns.

Getting to the playoffs for the first time since 2016 is the only thing on Beckham’s mind this year. If the Browns make the cut, Beckham hopes to have different results and be remembered for his play and not a boat trip.