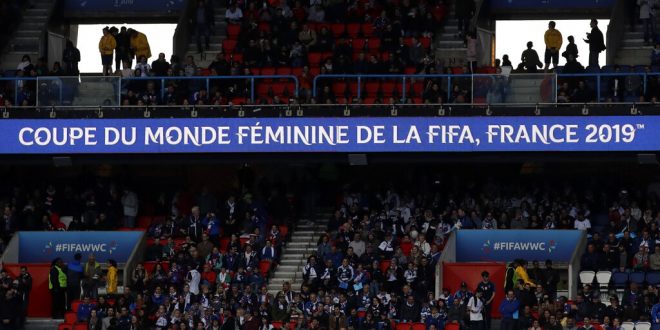 Fans wait for the start of the Women's World Cup Group A soccer match between France and South Korea at the Parc des Princes in Paris, Friday, June 7, 2019. (AP Photo/Alessandra Tarantino)

South Africa’s qualification in the FIFA Women’s World Cup in France is a historic feat for a team that just started competitive play under three decades ago. However, their first test against Spain is a tough one.

Spain arrives at the World Cup ranked 13th in the world by FIFA. They have put their disappointing 2015 World Cup behind them by winning every qualification game while conceding the second fewest goals.

Most of Spain’s players represent Spanish clubs, namely FC Barcelona and Atletico Madrid. So, they have preexisting chemistry and understanding beyond the national team. This is important for their pass-heavy, fluid style of play they will try to exhibit in France.

Midfielder Vicky Losada will be the team’s engine while attacking midfielder Alexia Putellas will be a major creative outlet. Alexia also has an eye for goal, as she was the squad’s second top goalscorer during qualifying.

Forward Jenny Hermoso had seven goals and nine assists during qualifying, and she will feature at striker for Spain. She was the top scorer in the Spanish domestic league this season, netting an impressive 24 goals in 28 games. She will look to continue her impressive form in their opening game Saturday.

Coach Desiree Ellis appeared in South Africa women’s first ever game in 1993 as a player. Now as coach of the team, she will be looking to lead Banyana Banyana out of a tricky group in the team’s first ever World Cup.

But it won’t be easy.

South Africa is the second lowest ranked team in the tournament, at 49. Only eight of the team’s players play professionally at club level, so they will find it hard to adjust to the high level of competition in their group.

Thembi Kgatlana is the team’s biggest star. She is the reigning African Women’s Footballer of the Year and is a legitimate threat whether she is fielded at striker or out wide. She, along with young midfielder Linda Motlhalo, both ply their trades for Chinese clubs and will be important influences on games.

Captain Janine Van Wyk is an experienced leader of the squad at center back. She will be hoping to limit goals as much as possible, which will be easier said than done. After a strong qualifying campaign in 2018, the team has not won its last nine games, including a 7-2 drubbing by Norway in their last friendly.

I'm a senior journalism student at Florida. I love sports, and I love covering sports. I'm one of the beat writers for the Gator soccer team right now, and if you follow me on Twitter @johnmiceli13 you'll never miss a soccer update
Previous FIFA Women’s World Cup: Germany Takes On China
Next Group A: Norway vs. Nigeria