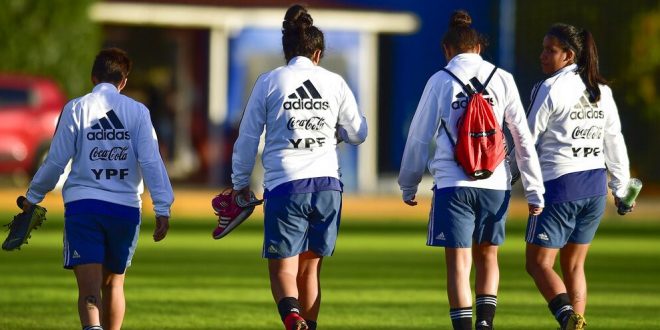 Argentine women's soccer players leave the field after a training session ahead of the FIFA Women's World Cup France 2019 tournament, at the Argentina Football Association in Ezeiza on the outskirts of Buenos Aires, Argentina, Monday, May 20, 2019. The women's team has only played together for less than two years. (AP Photo)

Matchday 1 of Group D for the 2019 Women’s World Cup continues with Japan taking on Argentina in PSG’s Parc des Princes at noon.

While the men’s international side has a storied past with players like Lionel Messi, Diego Maradona and Mauricio Pochettino (Did I mention I support Tottenham?), the women’s team is quite a different story.

Founded in 2003, La Albiceleste is ranked No. 37 by FIFA, comfortably the lowest in the group.

A Lack of Experience

One of the biggest issues plaguing the women’s national team is a lack of playing experience at the international level. Most of the women called up for the World Cup have fewer than 20 caps with the national team.

In addition, this is Argentina’s first World Cup appearance since 2007.

Argentina will likely deploy Lyon striker Sole Jaimes up top. The 6-foot center forward is a threat in the air, and facing a smaller Japanese side, could be a major decider in their opener.

Look for the likes of Florencia Bonsegundo and Mariana Lorroquette to swing in crosses from either wing to give Jaimes a chance at the top of a 4-2-3-1 formation.

In addition, Argentina’s captain, Estefania Banini, will look to create from the No. 10 position.

From one of the newest teams on the international stage to one of the most established, the Samurai Blue of Japan has qualified for all seven editions of the World Cup.

All of this sounds great, but Japan’s golden generation has gotten old. While some are still present in the team, the Samurai Blue are in a bit of a rebuilding stage.

Several players on the roster have appeared in multiple World Cups already and have over 100 caps for their country. This includes the likes of Saki Kumagai (center back, captain), Rumi Utsugi (defensive midfielder, fourth WC), Aya Sameshima (center back), and Mizuho Sakaguchi (midfielder). All of these players are over the age of 30, except for 28-year-old Kumagai.

Despite this experience, the average age for the squad is 24. This is because a majority of the 23-woman squad is filled with players under the age of 23.

When the Japanese need a goal, look no further than striker Mana Iwabuchi. The 26-year-old has already appeared for Japan in the 2011 and 2015 World Cups.

In her first 60 caps for the national team, she bagged 21 goals. As long as she can remain healthy for the tournament, Japan should fight for that second- or third-place spot in Group D to look to advance to the knockout rounds.

Here’s the schedule for the remaining Group D matches for the World Cup: 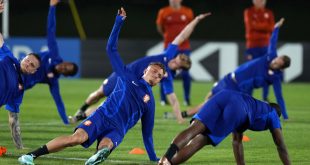