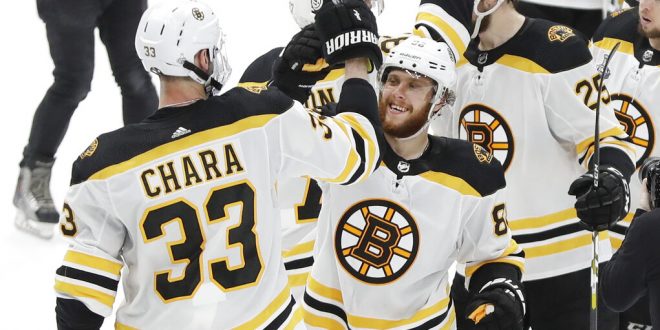 Boston Bruins defenseman Zdeno Chara (33), of Slovakia, celebrates with right wing David Pastrnak (88), of the Czech Republic, after the Bruins beat the St. Louis Blues in Game 6 of the NHL hockey Stanley Cup Final Sunday, June 9, 2019, in St. Louis. Both players scored goals as the Bruins won 5-1 to even the series 3-3. (AP Photo/Jeff Roberson)

After the Blues controversial game 5 win, the Boston Bruins were facing elimination in the Stanley Cup Finals. They weren’t giving up. They were desperate for a win that would force a game 7.

Boston has found themselves playing from behind for the majority of the past two games. According to head coach Bruce Cassidy, the Bruins were looking to change that. And they did.

Halfway through the first period, St. Louis committed their second penalty of the game. Ryan O’Reilly and a delay of game gave the Bruins a two man advantage. Boston seized the moment as Brad Marchand took a pass from David Pastrnak and the puck slid right by the Blues’ goalie Jordan Binnington to score.

Despite the Blues outscoring the Bruins 10-8 in the second, Boston held on to their lead.

At the start of the third it was still 1-0 Bruins, but the game’s energy seemed to have changed. Boston’s Brandon Carlo, assisted by Jake DeBrusk, scored on Binnington less than three minutes into the period. At this point it was 2-0 and St. Louis knew it needed to step up. Rather than scoring, the Blues ended up making multiple mistakes.

A turnover was committed by David Krejci and soon after Karson Kuhlman and Boston scored their third goal of the night. The Blues had a total of four penalties during the third period. They did manage to score after a shot by Ryan O’Reilly was reviewed and then ruled as a goal. It was just not enough. David Pastrnak and Zdeno Chara added two more goals on to the Bruins’ lead and sealed away a 5-1 win for Boston.

Following the game Bruce Cassidy spoke on his veteran players.

Boston isn’t in unfamiliar territory going into game 7 of the finals. They were a part of the last final’s game 7 back in 2011. The Bruins won the championship that year.

The final game of the 2019 Stanley Cup Finals is set for Wednesday at 8pm at TD Garden.

Maddie Schmidt's goal is to become a college football reporter. Be sure to check out her sports blog, mygamedaygal.com.
@@maddieschmidt15
Previous FIFA WWC: Argentina Versus Japan
Next Argentina Makes History Against Japan