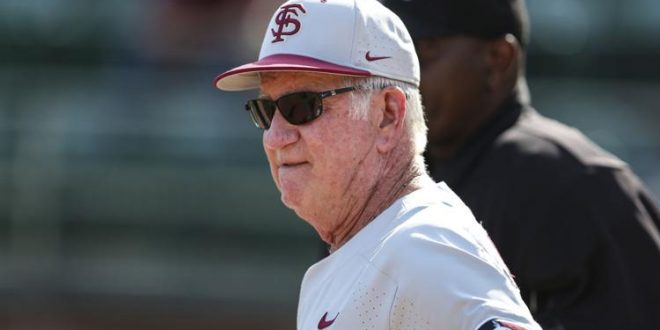 The Florida State University baseball team made strides this season. Many people doubted that the Seminoles would even make the tournament at all, leaving many shocked baseball fans after their 5-4 sweep against LSU. Much of the team’s success is owed to their head coach Mike Martin.

This is Marin’s 17th time taking his team to Omaha, with 23 being the programs grand total. The team has the longest streak in the country for postseason appearances. They have 43 appearances in a row, with 41 of those under Martin.

After being with the team for 40 seasons, he is set to retire after this one. Martin began his career with Florida State as a player but became the head coach in 1980.

Mike Marin Jr., Mike Martin’s son, explains that his dad pushes the coaching staff to keep the players positive, no matter what happens on the field.

The team has had a rough time this season offensively and defensively, but Martin Jr. believes that their newfound confidence gives them a new edge.

The coaches and team members were worried about their chances of getting in the tournament, but after 17 conference wins, Martin Jr. was hopefully.

Sara Dastgerdi is a current student at the University of Florida.
Previous MLB Shows Support for David Ortiz After Being Shot in D.R.
Next FIFAWWC Group A Match-week 2: France vs. Norway & Nigeria vs. South Korea